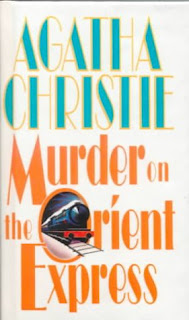 While en route from Syria to Paris, in the middle of a freezing winter's night, the Orient Express is stopped dead in its tracks by a snowdrift. Passengers awake to find the train still stranded and to discover that a wealthy American has been brutally stabbed to death in his private compartment. Incredibly, that compartment is locked from the inside. With no escape into the wintery landscape, the killer must still be on board! Fortunately, the brilliant Belgian inspector Hercule Poirot is also on board, having booked the last available berth. He launches an immediate and urgent investigation into this vexing crime- for which each of the thirteen other passengers seems to have a motive.

is remains one of her most popular mysteries today with two movies (one made for TV) and even a video game.

This was the second book chosen as the group read for the online reading group I own (Books Into Movies) and it was my first Agatha Christie mystery so I wasn’t sure what to expect. At first, I had to make myself read it and was even tempted to put it down at one point but ironically; even though it started off so slow, once it picked up speed it was like a runaway train with a jaw-dropping ending. 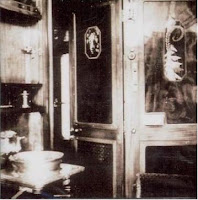 a murder mystery but all thirteen of the suspects were interesting and Christie managed to make every one of them have separate personalities. Besides, I wasn’t really sure if I could hold what happened on that train against the person that killed Ratchett. I think Christie said that the “victim” was all but acquitted in court for kidnapping and murder of a child before he skipped town. I never actually stopped to consider his innocence until someone in my group asked what gave the killer the right to dispense his justice? While it’s an interesting question, I didn’t actually care if the killer was caught or not. I just wanted to know how he or she did it and why of course!

It was interesting to see Hercule Poirot unravel the mystery although he himself was an annoying little man. It took me a while to warm up to him but I never really liked his personality. I wasn’t very surprised to learn that by the time Murder on the Orient Express was published, “Christie found Poirot 'insufferable' but because the public loved him, she refused to kill him off, claiming that it was her duty to produce what the public liked, and what the public liked was Poirot” (via Wikipedia- Poirot) and because of that he is the main character in almost 40 different mysteries, more than any of Ms. Christie’s other repeating characters.

Spoiler (highlight if you’ve read the book):
Throughout the story, I considered four different passengers as capable of Ratchett’s (aka Cassetti) brutal murder. At one point, I considered Ms. Hubbard especially since she went on and one about her daughter, I thought maybe her daughter could have been the maid that killed herself but I had all but ruled her out by the conclusion. And while I wasn’t suspicious (I had never read a mystery quite like this one before) I did puzzle over the fact that so many people of varied cultures on the same train in the middle of nowhere are somehow or another connected to the kidnapping and murder case of little Daisy Armstrong. I just assumed that the author went with the “it’s a small world” mentality. Boy was I in for a shock! 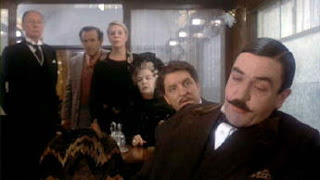 The Who's Who In The Whodunit!

Elegant, escapist entertainment at its stylishly European best. This Agatha Christie whodunit boasts an incredible international cast of some of the most wonderfully eccentric characters ever created.

Ingrid Bergman won an Oscar for her role as the slightly dim-witted, Bible-quoting Swedish missionary. Albert Finney is the dapper detective, Hercule Poirot, for whom murder-solving is a precise, intellectual exercise. Poirot agrees to interview all aboard the famous train's Calais coach, hoping to find the killer of an American millionaire before the local police arrive. Packed with sparkling dialogue and visually rich in texture, this incomparable thriller received six Academy Award nominations.

Reportedly the only adaptation based on her books that Agatha Christie personally approved of was the 1974 film Murder on the Orient Express. Starring an incredible amount of Hollywood’s top stars like Ingrid Bergman, Albert Finney, Lauren Bacall, Sean Connery, and many more.

After being wowed by Ms. Christie’s book I had to see what is known as the best adaptation of any of her work and I was hoping that it would be even half as good as the book. I needn’t have worried! Sure, the varied accents were hard to decipher and I liked Hercule Poirot a whole lot less because he reminded me of a vain, pompous frog but there aren’t any slow parts this star stuffed cast of characters! They managed to convey the story so well even if it’s not as subtle as in the book.

I could go on all day about how amazing this cast was, especially Lauren Bacall! Ingrid Bergman may have won the Academy Award that year for Best Supporting Actress (there were five other nominations too: Best Actor, Cinematography, Costume Design, Music, and Writing) for her part as Greta Ohlsson but I thought Mrs. Hubbard was so much better. I hardly even noticed Greta in the book and in the movie.

Not only was Murder on the Orient Express my first Agatha Christie novel but this film is also the first adaptation I have seen of her work. Now I’m only worried that no other adaptation will be able to measure up! We’ll see soon since I’ll be watching the 1965 movie Ten Little Indians before too much longer (also known as And Then There Were None).