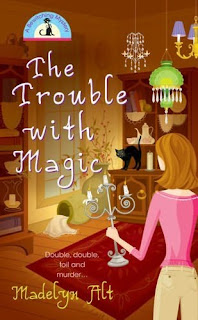 Bringing a little culture to Stony Mill, Indiana, Enchantments is one of the area’s finest antique stores. But shop clerk Maggie O’Neill and her employer Felicity Dow do more than conjure up curios for the locals—they each possess a talent for spellbinding sleuthing . . .

Bored with her office job, Maggie jumps at the opportunity to work at Enchantments. She was a little weirded out when Felicity described herself as a witch, but if her boss wants to play with broomsticks and cauldrons, where’s the harm? However, Maggie’s first day on the job may turn out to be her last when Police question Felicity in the murder of her estranged sister.

With everyone in town proclaiming Felicity’s guilt faster than the Salem Witch trials, Maggie finds herself wondering if she’ll also be tied to the stake. And lately, she’s been receiving messages on a spiritual frequency guiding her to prove Felicity’s innocence—and to embrace her own "charmed" life.

n January 2006, Madelyn Alt made her writing debut with the first book in her Bewitching Mystery cozy series The Trouble With Magic. The books feature an average, small-town-girl heroine named Maggie who according to the author popped into her mind one day out of the blue insisting that her story be told.

Having always been intrigued by the paranormal (especially witches and ghosts!), I was very excited when I discovered the Bewitching Mystery cozies. Maggie is such a down to earth 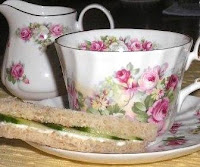 character and I just adored the antique shoppe called Enchantments that she starts working at because Mrs. Alt describes it in such vivid detail.

Since this is the debut book of the series, there is a ton of things going on but the actual mystery part of the story is never too far from the front and center. Clues are sprinkled throughout the book but the ending still a little surprised me. This whole series has a magical, mystical quality to them that reflects the actual magic in the books. You just can’t go wrong with witches, ghosts, antiques in a murder mystery! 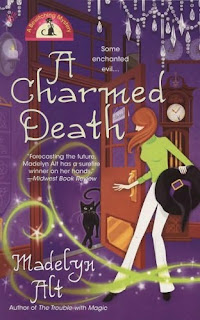 Maggie O'Neill was just your average small-town girl, stuck in a dead-end job until she started working at Enchantments, Stony Mill's finest antique shop with a unique mystical secret. Now Maggie is Indiana's newest witch. Learning to cope with her newfound powers is tough enough, but add to that keeping the stock at Enchantments organized, keeping the peace with her somewhat controlling mom, and remembering to tape reruns of her favorite show, Magnum, P.I., and Maggie's got a full plate.

But when a second questionable death occurs a scant two months into her store tenure, she can't turn her thoughts away from all the town gossip about the teenage princess and the mysterious circumstances surrounding the girl's charmed life and death. While the police get caught up in procedure and logic, Maggie uses every trick, charm, and intuition she can summon, with the assistance of her favorite witchy boss Felicity Dow, to get to the heart of this spellbinding murder.

Madelyn Alt returns to Stony Mill, Indiana in the second story of her Bewitching Mystery series A Charmed Death. Her budding empath 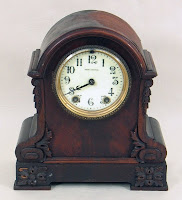 Margaret Mary-Catherine O'Neill; or Maggie as she would rather be known, has gotten herself tangled up in another murder in their small town. Although it’s a very new series by a new author, this book became Barnes and Noble’s second bestselling mystery for a little over two months as well as made it on their overall mass-market bestseller list for two weeks.

The N.I.G.H.T.S. (Northeast Indiana Ghost Hunting & Tracking Society) are a little more prominent in the book and there is a great ghost hunt too, during which you get to know the other hunters a little better. After Felicity (the owner of Enchantments and Maggie’s boss), Genevieve the ex- nun and Annie (the owner of a restaurant that makes incredibly delicious food) are still some of my favorite minor characters but I also just love Marcus’ personality. I hope to see even more of

him in future books!

My only complaint about A Charmed Death is that I didn’t really care for all the focus on the high school teenagers, even if the murder victim was one. The teenage angst got to be a little much at times, especially Marcus’ niece Tara with her constant attitude and disrespect. In direct contrast to her, Evie (the youngest member of the N.I.G.H.T.S.) also plays another important role in th 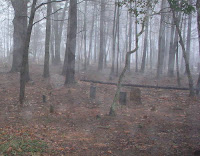 e book and is even working at the shoppe now too. While I understand why it was necessary for them to have so much “screen time” I much preferred when Maggie was center stage (I do wish Felicity had put in more appearances though).

A believer of paranormal herself, Madelyn Alt is in a way a lot like Maggie, who throughout the first novel and part of this one denies her gifts as an empath and writes off her experiences as coincidence. In Alt’s case, she experienced paranormal events like this too but continued to dismiss them due in part to how she was raised (also like Maggie). The author has admitted that some of herself went into her heroine’s character but she insists that Maggie came to her fully developed and they are more like sisters. 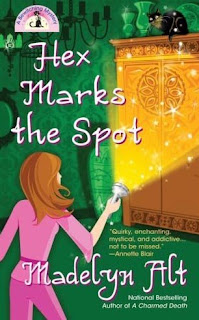 While her boss becomes entranced with a beautiful armoire at the countywide craft bazaar, Maggie can't help noticing the Amish craftsman who made it. Though his clothes may be plain, he himself is more handsome than a man sporting a jawline-only beard has any right to be. And he seems pretty aware that the ladies love his...furniture. But when the hunky craftsman turns up dead with a strange hex symbol near his corpse, Maggie wonders if the craft involved is the witchy kind.

The third and current story by Madelyn Alt that features Maggie O’Neil is Hex Marks the Spot. Set in a small Indiana community of varied cultures and religions, Maggie becomes involved in 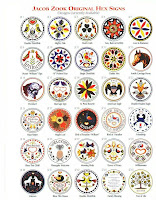 another murder investigation when a hex symbol is found near a dead Amish man. As with the first two books in these cozy Bewitching Mystery series, Barnes and Noble took a special interest in this book as well and it remained high on their bestselling mystery list for quite a while.

In a recent interview Mrs. Alt claimed that her cross-genre series that covers a little bit of romance, some paranormal, and a whole lot of mystery is influenced by such great authors as Agatha Christie, Daphne du Maurier, Kim Harrison, and Janet Evanovich. I believe that her books do include slight elements from these authors but the Bewitching Mysteries and their main character Maggie have a voice all of their own. 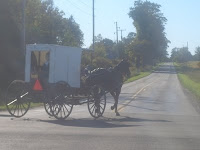 I’m ashamed to admit; but even though I’m familiar with many of the paranormal elements to these mysteries, I had never even heard of Amish hex symbols before so everything in this book was new to me. In fact, I know only a few things about the Amish people themselves but I found all of what was in the book incredibly fascinating.

While these mysteries do have sad and even heart-pounding, edge-of-your-seat moments to them, I just love how down to earth the characters in the book are even when they are doing extraordinary things. This series have become almost comfort reading to me! I can’t wait to read the next book No Rest for the Wiccan that comes out this November!

Blogs: Myspace, All Things Madly, Witchy Chicks, Amazon.com
Interviews: Quiet on the Set (audio), Prime Crime, Barnes and Noble (under Features)
Posted by Ladytink_534 at 12:43 AM