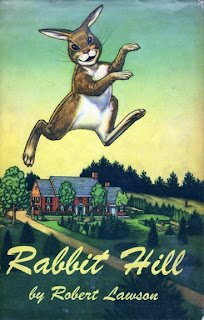 "New Folks coming, Mother- Father, new Folks coming into the Big House!" shouted Little Georgie the Rabbit. All the animals of the Hill were very excited about the news and wondered how things would change. Would the new Folks bring dogs, traps, and guns? Or would they be planting Folks who would care for the land and grow rich crops? It had been years since there had been a garden at the House.

Simple, yet oh so charming! At only 128 pages, with an illustration on almost every page, Robert 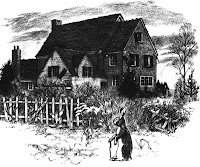 Lawson’s Newbery winning novel Rabbit Hill is most decidedly a children’s book but enjoyable enough for anyone of all ages. Mostly an illustrator for many books other than his own (and quite a few of them award-winning as well), Lawson is the only person to ever be awarded both the Newbery and the Caldecott medal for his story They Were Strong and Good published four years earlier.

There have been stories about how animals behave away from human eyes since before the written word but the ones that really made an impact were stories like Beatrix Potter and Thornton Burgess which this particular book fits in well. Animal tales, especially ones where the animals 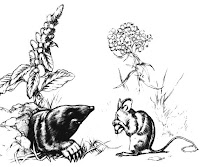 talk and act like humans have always had a place on my shelves and in my heart since before I even learned to read. Particularly as I was growing up too as I very rarely read books if they didn’t have animals in them or where the main characters! All of the little Animals in Rabbit Hill do appear in Lawson’s sequel The Tough Winter too.

This story is perhaps a bit wordy at times, especially when Father Rabbit gets started on his Kentucky bluegrass but even if it does seem a trifle old-fashioned (the very best kind in my opinion) and

seems to meander a bit, I truly enjoyed this quick read. It sort of reminds me of the Ballet Shoes by Noel Streafeild as quite a few things happen but when its over, it doesn’t seem like much at all went on. I do find myself wishing I could have read it from the human’s view point at times though the animals were plenty entertaining and interesting: “There’s Good Times, Georgie, an’ there’s Bad Times but they go. An’ there’s good Folks an’ there’s bad Folks, an’ they go too- but there’s always new Folks comi

n’. That’s why there’s some sense in that song you keep a-singin,’” said Uncle Analdus (don’t worry not all of the animals talk like this) on page 54 to Little Georgie (who is kind of like Potter‘s Peter Rabbit).

Of all the animals I think I agree with whoever T. is that the author dedicated the book to as I love Little Georgie as well. All of the animals are well presented for such a short story but he is definitely the favorite of the author as well as his fellow companions “for of all the younger Animals Little Georgie was the most beloved.” I’m not sure if kids today would sit through this story but I’m sure many adults would enjoy it. I plan to seek out other stories by this author soon and I’m looking forward to watching Little Georgie of Rabbit Hill if I can find it (originally on NBC Children's Theatre in 1967)… then I think I’ll go plant a garden.

First Line: All the Hill was boiling with excitement.

Wikipedia has a short page on Rabbit Hill that includes a story introduction.
Posted by Ladytink_534 at 9:14 PM