Help is Coming from Above 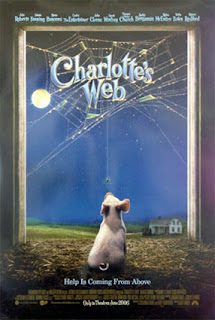 E.B. White's classic children's story comes to the screen in this live-action adaptation with an all-star voice cast. Fern Arable (Dakota Fanning) is a young girl growing up on her family's farm. When a sow gives birth to some piglets, Fern's father (Kevin Anderson) intends to do away with the runt of litter, but Fern has become attached to the little pig and persuades her father to let him live. The pig, named Wilbur (voice of Dominic Scott Kay), becomes Fern's pet, but when he grows larger, he's put in the care of Homer Zuckerman (Gary Basaraba), a farmer down the road. Fern is still able to visit Wilbur regularly, and it soon occurs to both of them that pigs tend to have a limited life expectancy on a farm, and that unless something unusual happens, Wilbur will eventually becomes someone's dinner. Charlotte, a friendly spider, hatches a plan to make Wilbur seem special enough to save by weaving messages about the "terrific" pig into her web, and she soon persuades her barnyard friends to join in her plan.

E.B. White's story of a little spider that saved a pig's life has d

elighted everyone since 1952 when it was first published. Then in 1973, another generation experienced it a different way when was adapted into an animated musical. More than 50 years after White's book was nominated for the Newbery award, Walden Media, Paramount, and Nickelodeon teamed up to bring the world of Charlotte's Web as a live-action/ computer-animated film

The nostalgic scenery and the beautiful setting are the very best highlights of the film, besides the actors (like Dakota Fanning who plays Fern)/ voice actors. Even if at times it did remind me of Walden Media’s work on Because of Winn-Dixie. However, instead of a cute dog, somehow they are able to get you to love and care about a creepy spider (although

the fact that Julie Roberts is her voice certainly helps!) and a little “runty pig,” but then everybody loves Wilbur. The soundtrack is also wonderful as it’s done by my second favorite composer Danny Elfman (my first is the Sherman Brothers who actually composed the songs for the first animated version).

The animated Charlotte’s Web by Hannah Barbara has been one of my favorite films and it has never failed to make me laugh and cry. I actually saw it way before I 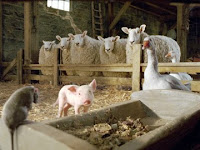 read Mr. White’s marvelous book too but when I learned there was a re-make I couldn’t help but be eager to see it. Especially when I saw the names attached to the project! Julia Roberts (Charlotte), Kathy Bates (Bitsy the cow), Reba McEntire (Betsy the cow), Oprah Winfrey (Gussy Goose), John Cleese (Samuel the Sheep aka the old sheep in the book), Steve Buscemi (Templeton, The Rat), and many more too. The star power attached to the film did worry me a little but for the most part I really loved seeing the story the way the author must have originally envisioned it. Some

of the film was made with animatronics, and you can tell at times but there are real animals too.

Written so the story is "as loyal to E.B. White as [it] can possibly be" by the original screenwriter, the script was revised to add in humor that keeps the film from verging into being sickly sweet. Some of the humor was a bit distracting but never distasteful and it didn’t subtract from the emotional ending either. Wilbur (who is ironically played by almost 50 different pigs) will always be terrific in my book and Charlotte too. Actually, everybody involved in this radiant movie is terrific!