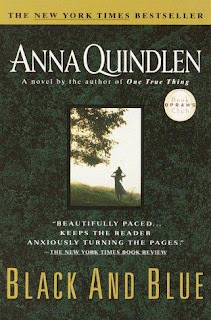 For eighteen years, Fran Benedetto kept her secret. And hid her bruises. And stayed with Bobby because she wanted her son to have a father. And because, in spite of everything, she loved him. Then one night, when she saw the look on her ten-year-old son's face, Fran finally made a choice- and ran for both of their lives.

Now she is starting over in a city far from home, far from Bobby. And in this place she uses a name that isn't hers, and cradles her son in her arms, and tries to forget. For the woman who now calls herself Beth, every day is a chance to heal, to put together the pieces of her shattered self. And every day she waits for Bobby to catch up to her. Because Bobby always said he would never let her go. And despite the flawlessness of her escape, Fran Benedetto is certain of one thing: It is only a matter of time...

and they stayed true to that with their April 1998 pick of former New York Times columnist Anna Quindlen’s book Black and Blue. She had retired from her career as a Pulitzer Prize winning journalist to write full time a year before the book was published and it was also adapted into TV movie starring Mary Stuart Masterson and Anthony Laragia in 1999.

In an interview, Mrs. Quindlen said that she will the first to tell you that her book

“is not easy to digest” but that she wanted to write a story about marriage. She did no research for the book and claims that every bit of it is fiction too (unlike some of her previous works that reflect parts of her life). I’m one of the first to say that this came as a little bit of a shock to me because while I’ve never been in an abusive relationship before I have read plenty of stories like this one and a good majority of them are personal experiences for the writer. It just seems incredibly real! 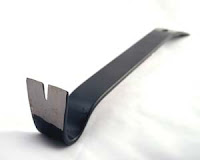 This was the first time I had read anything by this author and yet I knew better than to expect a happy ending because her heroine Fran just goes along letting things happen to her. She only really does two things in the whole novel that “rocks the boat," so to speak and that is when she takes her kid and runs from her abusive (cop) husband and when she refuses to relocate after the organization that helped her run away tells her she needs to move again. Other than that, she just drifts along just letting things and people come into her life. Don’t get me wrong, she was a likeable character, I just wished she had done more! 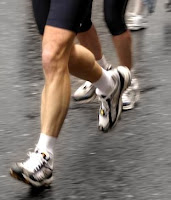 Normally I would never have picked this book up on my own even though I have read and enjoyed a few Oprah picks before but one of my online groups was reading it. I can’t say I’m sorry I read Black and Blue because Anna Quindlen is a masterful author but at the same time there was quite a lot I disliked…. especially the ending. It was so disappointing and I think the ending is why only three people (out of at least 20) in the group said they enjoyed the book. Quindlen said:

"People are so invested in happy endings, I think that's why people are so frequently disappointed in their own lives, because they've had a bellyful of happy endings in film and fiction and they don't quite understand why it doesn't happen that way. And I think good literary fiction mirrors real life and I certainly think that this book does."

Moreover, while I could probably agree with her because the ending did make sense, I would still have enjoyed a bit more closure or something. I would almost rather have had this story written from the point of view of Fran’s son Robert.


Picture Explanations
Bruise: Fran's husband constantly beat her up. He even broke her collarbone.
Ferris Wheel: Mike and "Beth" (Fran) take a bunch of kids to the carnival to celebrate the first win of the peewee basketball team that Robert is on and that Mike coaches.
Crowbar: Fran keeps a crowbar under bed for protection
Running: Fran meets Mike while out running something she has always loved doing.
Posted by Ladytink_534 at 3:04 PM