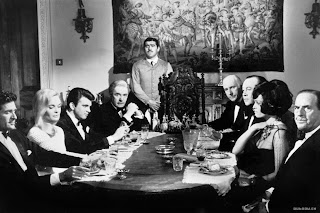 Hang it all! Who will serve breakfast now that the cook's been murdered?

Ten people-eight strangers and two married domestics-come from near and far to attend a posh weekend gala at a remote castle. What's the occasion? Easy. Each has unwittingly been invited to his/her own murder! Who's the mastermind behind this diabolical scheme? Not so easy. Because the cyanide-dipped pen that first put this dazzling brain-boggler to the page was held by the most ingenious crime mistress of all: Agatha Christie.

The title Ten Little Indians refers to the ten invitees, to the familiar nursery rhyme and to the ten Indian figurines affixed to a serving plate at the castle. After the fatal poisoning of a guest (Fabian), one of the figurines is eerily missing. One down. Nine to go.

A couple of years after Agatha Christie had published her first version of the book that would later be known as And Then There Were None, she adapted it into a stage play. Soon after that,

René Clair directed the first adaptation of her story into a film but it wasn’t too long before other filmmakers followed with their own take on Christie’s novel. In 1965, George Pollock used Christie’s book and her stage play for his adaptation of Ten Little Indians, which was one of the titles that the book was published under before it became And Then There Were None.

Holloway, and Wilfrid Hyde-White is a movie I have seen a countless number of times so when I realized that Holloway and Hyde-White were reunited in this film, I was very intrigued. However, I had already read Agatha Christie’s book, therefore I knew what would happen (or at least, I thought I did!) in the movie to some extent, so I had a bit of a hard time trying to wrap my mind around the fact that two characters that I have enjoyed for such a long time weren’t going to be the nicest of people, to say

the least. Of course, these fabulous actors pulled it off though! There were actually quite a few good actors and actresses attached to the movie like Shirley Eaton, Hugh O’Brian, even Fabian among several others.

Quite a lot is changed from the book like the setting (snowed-in in the mountains here, visiting a private island with no way to leave in the book), the ending, and several of the characters are completely altered (the mean spinster in the book is a movie star played by Daliah Lavi) as well as some action and romance scenes added to make it more “Hollywood”. Personally, I would have preferred a complete adaptation of the book but to my knowledge, none has been made yet. They all seem to follow the formula of the stage play that Agatha Christie wrote based on her book instead.

I’m not really complaining though. I actually did like the ending and George Pollock is a great director. This was a truly good adaptation of a wonderful novel… much better than I thought it would be at least! If I had to make one suggestion, it would have been to try to get Rex Harrison to play one of the bad guys instead of one of his fellow My Fair Lady co-stars but that’s just me since Harrison is one of my favorite actors. Oh and the death scenes are a little over dramatic (sometimes laughably so) and a more subtle touch would have made Ten Little Indians an even better movie.