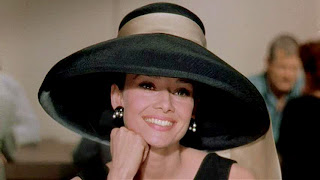 From the opening strains of Henry Mancini and Johnny Mercer’s haunting, Oscar- winning song “Moon River,” you’ll once again be under the alluring spell of that madcap, carefree New York playgirl known as Holly Go lightly (Audrey Hepburn) in this 24- carat romantic comedy based on Truman Capote’s best-selling novella. George Peppard is the struggling and “sponsored” young writer who finds himself swept into Holly’s dizzying, delightfully unstructured lifestyle as she determinedly scours Manhattan for a suitable millionaire to marry.

There are few, if any actresses that posses the charm, beauty, and style of Audrey Hepburn especially in the iconic film Breakfast at Tiffany’s, the self-described “jazziest [role] of her 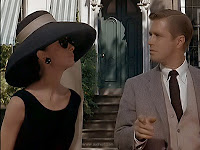 career.” Adapted from a novella by author Truman Capote, the role of Holly Golightly was originally meant to go to Marilyn Monroe; whom the author felt fit the role of Holly better, but Ms. Hepburn proved him wrong. Nominated for five Academy Awards, (two of which it won for the score and the song "Moon River") and several other very highly coveted awards, this is the epitome of a funny, sad, and so incredibly romantic film.

Even award-winning films and actresses are forgotten over

time but not this one! Despite the fact that the movie was made nearly 50 years ago, the original “glamour girl” is still inspiring fashion today. A few years ago, the Givenchy satin evening gown that Audrey wears in the film was even auctioned off and the winning bid was the highest ever paid for a dress from a film. 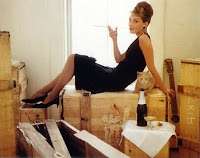 Tiffany’s? It’s not even completely because of the fact that I adore Audrey Hepburn, but it wouldn’t be the same if she weren’t in it. She’s just so beautiful and extremely talented that almost everyone else in the film is dull by comparison. I really love older movies but I haven’t really explored the films from the 60’s too much so a lot of the actors in the movie were unfamiliar to me but I did see a few cameos of people that I recognized (like Buddy Ebsen) and one I didn’t until later…

Mr. Yunioshi. He’s actually played by Mickey Rooney! It's one of the most often critized parts in a film though and in many cases has been cut completely.

Usually I love to read the original source material when I like a movie (and vice versa) but I have never gotten around to reading Capote’s book. However, I highly doubt it could be better than the movie and besides, I’ve heard that Capote was extremely disappointed with how the adaptation turned out. Holly may be “just crazy about Tiffany’s”, but I’m just crazy about Audrey so this film will always be one of my favorites.

Playlist:
Trailer, Audrey Hepburn: A Style Icon, The Making of a Classic (2 parts)