Spying is Hard to Do 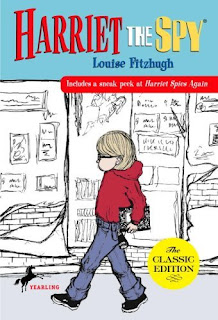 Harriet M. Welsh is a spy.

She's staked out a spy route, and she writes down everything about everyone she sees, including her classmates and even her best friends. From Harriet's notebook:

I BET THE LADY WITH THE CROSS-EYE LOOKS IN THE MIRROR AND FEELS JUST TERRIBLE.

PINKY WHITEHEAD WILL NEVER CHANGE. DOES HIS MOTHER HATE HIM? IF I HAD HIM I'D HATE HIM.

IF MARION HAWTHORNE DOESN'T WATCH OUT SHE'S GOING TO GROW UP INTO A LADY HITLER.

Then Harriet loses track of her notebook, and it ends up in the wrong hands. Before Harriet can stop them, her friends have read the always truthful, sometimes awful things she's written about each of them. Will Harriet find a way to put her life and her friendships back together?

In this groundbreaking, bittersweet coming-of-age story, Louise Fitzhugh has created one of literature's most realistic and memorable characters.

Despite the fact that Louise Fitzhugh’s best-known book, Harriet the Spy has garnered criticism for its unlikable main character, the Sequoyah Book Award winner has since become considere

d a classic. The author’s own New York Times obituary credits her with introducing "a new realism to children's fiction and has been widely imitated.” Not only has her style been imitated but so has her book! Ms. Fitzhugh, herself wrote two other stories featuring characters from Harriet the Spy, The Long Secret and her posthumously published Sport but in 2002 (nearly 30 years after the original author had died), an author named Helen Ericson

wrote a “sequel” called Harriet Spies Again. It won the Best Juvenile Edward award but many of the original fans hate it.

That’s not the only adaptation of Harriet though; she was also adapted into a movie! Nickelodeon’s very first film to be exact, and it was released in 1996 with Michelle Trachtenberg as Harriet in her first starring role with Rosie O’Donnell as Ole Golly. It won a few small awards and was generally thought well of at the time even though there were a few changes from the book. I do remember watching the film when I was a kid but I can’t remember whether or not I even liked it, I do know that this was my first time reading the original book though.

I'm not sure if I would dislike Harriet or not if I had read this as a kid or at least around Harriet’s age instead of as an adult because a lot of children do seem to enjoy the book. Some adults who read it as children have fond memories of it, and there are some who claim that it inspired them to become a journalist, a writer, or even a private detective. I don’t know if it’s the idea of the character that everyone likes, the admittedly well-written story, or if they actually do like Harriet herself but I couldn’t stand her (or her parents for that matter). I thought she was obnoxious, thoughtless, and sometimes even downright cruel but then again, there are some children who are like that. Not all children though, which is mostly how they are portrayed throughout the book. Harriet may have many fans, both young and young at heart but I’m just not one of them.

Picture Explanations
Harriet & Janie: Harriet is the heroine of this story & Janie is her best friend who wants to blow up the world.
Dumbwaiter: Harriet hides in an old dumbwaiter to spy on Agatha K. Plumber, a wealthy lady who never gets out of bed.
George Wildenstein: Ole Golly's suitor