An Inventive and Beautiful Nightmare 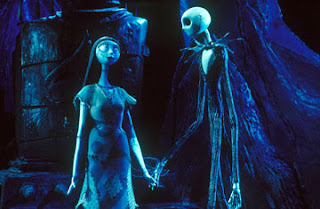 Enter an extrodinary world filled with magic and wonder- where every holiday has its own special land... and imaginative, one-of-a-kind characters! The Nightmare Before Christmas tells the heartfelt tale of Jack Skellington, the Pumpkin King of Halloween Town and all things that go bump in the night. Bored with the same old tricks and treats, he yearns for something more and soon stumbles upon the glorious magic of Christmas Town! Jack decides to bring this joyful holiday back to Halloween Town. But as his dream to fill Santa's shoes unravels, it's up to Sally, the rag doll who loves him, to stitch things back together.

This critically acclaimed movie milestone captured the hearts and imagination of audiences everywhere with its Academy Award nominated stop-motion effects, engaging Grammy-nominated music, and the genius of Tim Burton (Batman, Bettlejuice). The Nightmare Before Christmas- a delightful treat the whole family will enjoy!

decorations were being replaced with Christmas ones and because those two holidays met in that shop window, that animator was inspired to write a slightly different kind of holiday poem. His name was Tim Burton and that poem was called The Nightmare Before Christmas. It took a little while to get the idea to become more than an idea, and then it took even longer for that idea to become fully developed but after nearly a decade, the living illustration and probably the only movie in existence that can be

played both during Halloween and Christmas time was released.

Never my favorite “Disney” movie as a kid, I rediscovered it again when I was a little older and was able to love and appreciate it so much more. Eventually though my VHS copy stopped working properly so it had been years since I’d seen it last when the newest version was released. Tim Burton’s whimsical darkness has fascinated me over the years and its all there in the

film. Technically, it’s not as “pretty” as Burton’s other stop-motion animated film The Corpse Bride but its much more fun!

One of my favorite composers (and Burton’s too), Danny Elfman was responsible for helping make the movie what it is because not only did he create the soundtrack and help produce the film, he even sings! He’s Jack Skellington’s singing voice as well as two o

What I find amazing though is how intricate and how hard it was to make this film! True it does show it’s age a little but at the same time, for something that is 15 years old, it has held up remarkably well to the test of time. It has also become a major part of our pop culture too just like the Christmas specials that everyone remembers so fondly today. The only difference is… this one works for Halloween too.