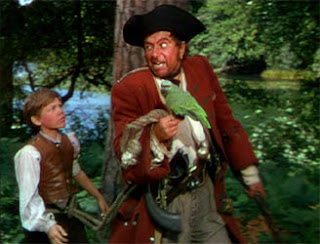 Ahoy, mateys! Come aboard the good ship Hispaniola and set sail in search of buried treasure in one of Disney’s most critically acclaimed adventure classics.

Aye, for that kind of excitement that only treasure and treachery can bring, there’s no better destination than Treasure Island! 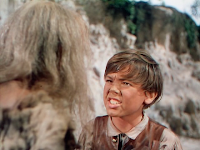 remembered quite like this one. After the war, Walt Disney couldn’t transfer his earnings out of England so instead of setting up and having to train a new studio of animators, he decided to create his first full-length live action movie and film it in England.

Although Mr. Disney and his family visited Europe during the filming, he had little to do with the actual filming. He left it mainly in the hands of Perce Pearce and the rest of the crew in England which resulted in the film not being as “Disney” as most of his

movies. Many critics were shocked by a Disney movie having bloody fights and death, especially since Cinderella had come out earlier the same year. While Cinderella could arguably be aimed mainly toward a female audience, Treasure Island is an all “boy adventure” (of course, many girls enjoyed it too!).

Unsurprisingly, there were a few people upset about an American playing the part of Jim Hawkins but Bobby Driscoll is an essential 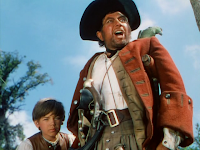 part of the film and I don’t think anyone before or since has made a better Jim. He was such and talented kid and he helped balance out the decidedly “English feel” to the film and made it relatable for American audiences. However, the real star of this film was Robert Newton because to put it simply, he IS Long John Silver. Whenever I think of a pirate he was the first person to pop into my mind (before The Pirates of the Caribbean movies came out anyway) and evidently I’m not the only one because he has been credited with inventing the “stereotypical pirate voice”. Newton did such a masterful job that he never was able to shake off his pirate image and went o 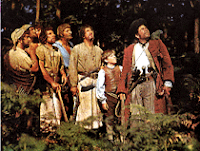 n to star in an unrelated movie called Long John Silver and a TV series based on his alter ego too.

It still surprises me to realize that until a few years ago, I had never even seen this lavish, beautiful film. How could I not fall instantly in love with the characters and the settings (many of which have an optical illusion called glass shots painted by Peter Ellenshaw)? I haven’t read Robert Louis Stevenson’s’ book yet but I do plan on it soon. Treasure Island has a wonderful plot, terrific acting, and an amazing adventure… they sure don’t make them like they used to!

“There is more treasure in books than in all the pirates' loot on Treasure Island and at the bottom of the Spanish Main... and best of all, you can enjoy these riches every day of your life.” ~ Walt Disney