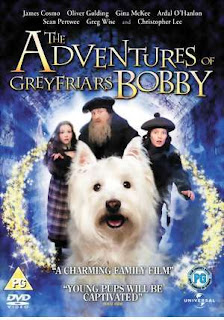 A big story with a small hero, The Adventures of Greyfriar's Bobby is a magical film for the whole family. Bobby, a friendly small terrier, befriends Ewan, a young boy. The adventures they share change their lives and the city they live in forever. Based on the true story of 'Greyfriar’s Bobby'.

Between the legend, the story based on the legend written by Eleanor Atkinson, and the films

based on both, the true facts behind the story of Greyfriar’s Bobby have been lost in the myth until the recent British film was made. The book Atkinson wrote about Bobby helped his legendary deed become known worldwide in 1912 but she did get many of the facts wrong. This film does correct some of them (such as who Bobby’s owner really was) but it did “take liberties” as well, mainly Bobby himself but for the most part, it remained true to the documented facts about Edinburgh’s smallest hero.

In many stories, Bobby was a Skye terrier (an almost extinct breed) but in the new film, they used a West Highland White Terrier instead. The dog trainer Gerry Cott said, "We had to make a choice, but this is something that has been contentious. When we started to talk about this film, we had to make a choice: 'Who is Greyfriar’s Bobby? In the end we decided against the Skye terrier and the Cairn Terrier for various technical reasons so, our Greyfriar’s Bobby is effectively a wild West Highland Terrier. By 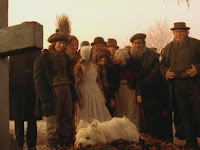 that I mean we allowed him to grow long hair, not be coiffured and clipped as they would now but to look as he might more than 150 years ago. So that's our Greyfriar’s Bobby.” 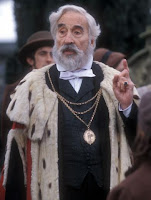 hings in the story but I enjoyed it regardless. I was a bit wary of seeing this newest version of Bobby’s story before I watched the Disney one but I was convinced it was well worth seeing because of the gorgeous location and talented actors attached to it.

There were several things that bothered me during the movie like how the main character was really the boy Ewan played by Oliver Golding instead of Bobby. Not to mention how overly evil the bad guys were compared to the characters James Brown (played by James Cosmo), Minster Lee (Greg Wise), and the Lord Provost (Christopher Lee). I was also hoping that the real life statue memorial of Greyfriar’s Bobby commissioned by Lady Burdett-Coutts would make it into the film, as it would have helped make the ending a bit less abrupt. Regardless, it was still a great take on a heartwarming story but I wasn’t very surprised to learn that it didn’t do very well at the time of its release.