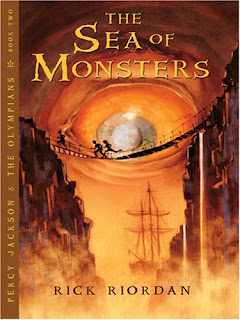 Percy Jackson's seventh-grade year has been surprisingly quiet. Not a single monster has set foot on his New York prep-school campus. But when an innocent game of dodgeball among Percy and his classmates turns into a death match against an ugly gang of cannibal giants, things get . . . well, ugly. And the unexpected arrival of Percy's friend Annabeth brings more bad news: the magical borders that protect Camp Half-Blood have been poisoned by a mysterious enemy, and unless a cure is found, the only safe haven for demigods will be destroyed.

In this fresh, funny, and hugely anticipated follow up to The Lightning Thief, Percy and his friends must journey into the Sea of Monsters to save their beloved camp. But first, Percy will discover a stunning new secret about his family -- one that makes him question whether being claimed as Poseidon's son is an honor or simply a cruel joke.

Rick Riordan’s bestselling series Percy Jackson and the Olympians continues with the second book The Sea of Monsters, which continues almost an entire year after the first book The

Lightening Thief. Perseus (Περσεύς) was one of the few Greek demigods (or Half-bloods) to ever survive his adventures so it was only natural that Percy Jackson’s mother would name him after the great hero- despite the fact that Perseus was Zeus’ son and Percy is Poseidon’s’. 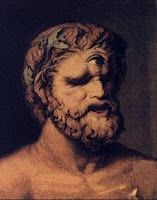 ones too), while facing many battles along the way. Percy’s new friend Tyson seems to be a kind of simpler-minded Grover and he does handle the role Grover would normally occupy but I liked him a lot too. I know I’m going to have a hard time ever thinking of a Pegasus again without thinking “chickie-ponies”! I do hope he appears in future books as well.

Again, I was reminded strongly of J.K. Rowling’s Harry Potter for a couple of chapters and then the story really came into its own. Percy and his friends even get to experience an updated version of Odysseus' odyssey- complete with the cyclops Polyphemus- on their quest to rescue their friend Grover and to find the Golden Fleece in order to save the camp. Riordan doesn’t overburden you at any point with the old myths, instead he makes them as fresh and exciting as if they were brand new. In an interview he said, “I think mythology has endured so long because these old stories describe something timeless. Hearing the exploits of the gods and heroes, we learn a lot about the best and worst of human nature.”

Picture Explanations
Guinea Pigs: C.C has quite a collection of these...
Polyphemus: The cyclops Percy and his friends need to get past in order to get the Golden Fleece needed to save the camp.
Posted by Ladytink_534 at 9:30 AM