Based On a True Story 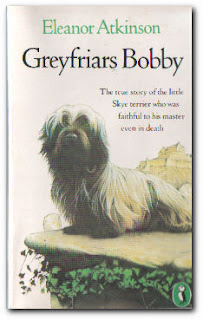 The remarkable true story of Bobby, an energetic little Skye terrier who is devoted to his master, Auld Jock. Even when the old man dies Bobby refuses to leave him. Not even the fierce caretaker of the kirkyard can stop him from watching over Auld Jock's grave, and every night for fourteen years Bobby returns faithfully to sleep by his master.

Throughout Scotland’s history, there have been many famous

people who have done great things but it was the devotion of a little Skye terrier named Bobby to his master that has captured the hearts of millions. When Bobby’s loyalty had become but a legend, American author Eleanor Atkinson heard of the little dog’s story and decided to write a (slightly embellished) fictional novel of Greyfriar’s Bobby in 1912. Since then, people have flocked to Edinburgh to pay their 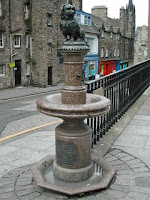 respects to the grave Bobby guarded for 14 years and to see the fountain monument that was erected in his honor by the Baroness Burdett-Coutts too.

Amazing that a little dog who died almost 140 years ago is still being remembered even today. Somehow, I believe that we have Mrs. Atkinson’s book to thank in part for the continued remembrance of Greyfriar’s Bobby. Her book simply helped bring his story alive and even though the novel itself is written in English, every bit of dialogue, from the “wee bittie bairns” to the “gude-mons” (good man), is written in a thick Scottish brogue. It made it incredibly hard to puzzle through but it does

make the story seem even more authentic (I just wish I could have found an annotated or audio version to help me understand it more).

The beloved Scottish Skye terrier’s story is so popular that it has been adapted to film a few times, most notably by Disney in 1961 and recently in 2006 but because of the shortage of these terriers (they’re actually facing the threat of extinction) a West Highland White terrier was used to play Bobby in the latter. This was not the first time that another type of dog took his part either. A collie took over the entire plot of the story (leaving Bobby out altogether) in MGM’s Challenge to Lassie in 1949.

Animal lovers of all kinds have loved Eleanor Atkinson’s account of Bobby’s fidelity ever since it was first published and although it was written for adults, just like in the novel, Bobby’s biggest fans are the children. “And whether the children saw him or not they knew he was always there after sunset, keeping watch and ward, and “lanely” because his master had gone away to heaven; and so they called out to him sweetly and clearly: ‘A gude nicht to ye, Bobby.’ ”

Let His Loyalty & Devotion
Be a Lesson to Us All

~ This book was dedicated to the author’s husband, the novelist Francis Blake Atkinson.