To Succeed, Jump as Quickly at Opportunities as You do at Conclusions 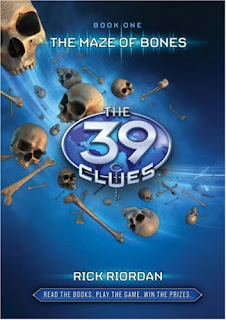 What would happen if you discovered that your family was one of the most powerful in human history? What if you were told that the source of the family's power was hidden around the world, in the form of 39 Clues? What if you were given a choice-- take a million dollars and walk away... or get the first Clue? If you're Amy and Dan Cahill, you take the Clue-- and begin a very dangerous race.

Benjamin Franklin was one of the founders of the United States of America, an incredible

inventor, "printer, satirist, political theorist, politician, scientist, civic activist, statesman, and a diplomat" too. However, according to author Rick Riordan’s first book in his 39 Clues series The Maze of Bones, he and just about every other powerful famous person over the years was a part of the Cahill family. In the ultimate scavenger hunt, two young children Dan and Amy along with their inherited cat and babysitter, must race the rest of the family to the 39 Clues hidden around the world that reveal the secret power behind the Cahill name. Whoever wins will be the richest people in the world…

Rick Riordan is the author of the Percy Jackson and the Olympian series, which is also an adventure story, but it features gods, goddesses, and creatures from Greek myths. Scholastic pitched him the idea of the 39 Clues series and asked him if he would be interested. The author said, "When they described the idea to me, I said, 'Wow that sounds really great!' I mean, you get to do all this cool stuff with history, and you get to make it like a scavenger hunt across the world. So as a teacher myself I was intrigued, so I said yeah, sure I'll do that." 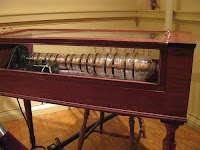 The Maze of Bones is a fairly fast read (and the author said it didn’t take him very long to write either) but it is jammed full with interesting things and places. I’m really looking forward to the movie version that is currently in the works by DreamWorks with Steven Spielberg involved as well. There are also collectible cards with every book and one in each story that 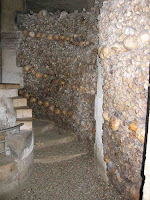 corresponds to an online game in which you can win prizes.

"The neat thing about 39 Clues is that it's so grounded in history," Mr. Riordan said and he was right. That's what makes the story so very interesting! The bare bones of the plot isn't exactly new: two mistreated orphans set out against several unlikable characters to win something and in that way it's a classic adventure that will appeal to both boys and girls. However, basing a lot of the story in real history (Franklin really was an author and he did create the inventions used in the book in search of the clues such as the lightening rod and the glass harmonica) is what makes this incredibly fun series very unique and one that I really look forward to reading.

Picture Explanations
Benjamin Franklin's Statue: Amy and Dan run into this when looking for the next part of the first clue.
Egyptian Mau: Aunt Grace's cat Saladin, whom Dan and Amy inherit.
Glass Armonica (aka glass harmonica, bowl organ, etc.): Another part of the clue: famous composer wrote music for it when it was still popular.
Paris Catacombs: Where Benjamin Franklin hid the directions to one of the clues in one of his many puzzles.