Mozart Was a Cahill 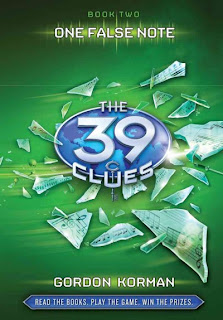 Amy and Dan Cahill are spotted on a train, hot on the trail of one of 39 Clues hidden around the world. Police report a break-in at an elite hotel, and the suspects sound suspiciously like Amy and Dan. When there's a Clue on the line, anything can happen. 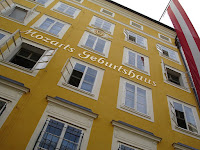 of the 39 Clues series and he published the first book The Maze of Bones. However the books in the 10 book series are going to be written by different authors and Gordon Korman had the honor of penning the second novel One False Note (and is currently working on the eighth) in this globe-trotting “multi-media adventure series” that brings together reading and online games (not to mention the collectible cards that come with each book).

Rick Riordan is a genius because he combines an amazing 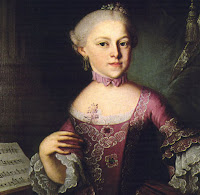 adventure with indirect learning in all his books and I truly enjoyed learning about famous people in a roundabout way (just like his Greek gods and mythical creatures in his main series). One False Note isn’t any different just because it’s written by another author, Gordon Korman picked up the reins about Wolfgang Amadeus Mozart right where Riordan left off about Benjamin Franklin.

The books in this series are SO neat, like The Da Vinci Code and National Treasure all mixed up into one storyline. What’s even

more impressive is that even though the authors vary from book to book, most people would hardly even notice! Amy, Dan, their au pair, and even their cat Saladin are very consistent too.

In an interview Mr. Korman said, "The bar was set by that first book and I had to figure out a way using my own situation to create that same level of excitement and danger and entertainment for my own book." In my opinion, he did very well and now I just have to wait for the next book The Sword Thief by Peter Lerangis in which the characters go to Japan in search of the next clue.

~Note: Dedication reads- For all the brother -sister teams from the Mozarts to the Cahills, from a grateful only child.~ GK

Picture Explanations:
House: The home where Mozart was born.
Nannerl Mozart: This was Wolfgang Amadeus' sister, whom is was said was just as good as he was but wasn't allowed to perform being a girl.
Statue: An Austria monument of the composer.
Posted by Ladytink_534 at 11:41 AM