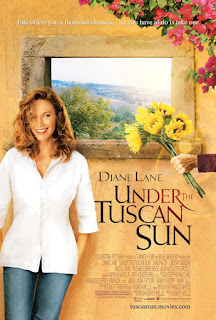 From the studio that brought you Sweet Home Alabama comes the extraordinary romantic comedy starring Academy Award nominee Diane Lane. Based on the #1 New York Times best-selling book, Under the Tuscan Sun follows San Francisco writer Frances Mayes (Lane) to Italy as a good friend offers her a special gift-- ten days in Tuscany. Once there, she is captivated by its beauty and warmth, and impulsively buys an aging, but very charming villa. Fully embracing new friends and local color, she finds herself immersed in a life-changing adventure filled with enough unexpected surprises, laughter friendship and romance to restore her new home-- and her belief in second chances.

Audrey Wells; the director, the screenwriter, and the co-producer very loosely based her 2003 Italian movie Under the Tuscan Sun on the memoir by Frances Mayes, Under the Tuscan Sun: At Home in Italy. Mayes’ bestselling book is about the author’s  purchase and restoration of a house in Italy and using her background as a poet, gourmet cook, and travel writer she tells her story. Audrey Wells (somewhat edited) and combined this with her own ideas of a woman overcoming heartbreak to get this film.

A beautiful movie that is an ‘internal adventure story,’ filmed entirely in Italy with a mostly Italian crew (there’s only a handful of American actors total once they get to Italy) except for one day in the director’s home town of San Francisco which takes place in the early part of the film. The villa Frances buys in the film is called Bramasole which means yearning for the sun. Though it is based on a real place, filming was in another location nearby in Villa Laura. The lovely scenery of the Tuscany countryside, Positano, and a little bit of Rome carry a good bit of this film with the esteemed Diane Lane carrying the other half. I believe this is one of her best roles and she’s absolutely gorgeous in that white dress and in several other scenes as well. The directors said in an interview that she had her in mind all along for the role of Frances. 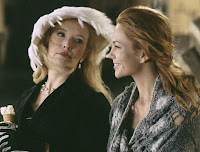 Wells said Under the Tuscan Sun is, “about forcing yourself to engage even when you don’t feel ready to. About taking a step even before you’re ready to take a step because if you wait until you’re ready, you’re never going to do it.” There’s even the obvious metaphor for Frances that she’s remodeling a house while she’s trying to remodel her life.  Just as she brings life back to the house by the end and gets everything she wished for (though she doesn‘t realize it), she’s brought herself back to life as well, mostly through the people she encounters in Tuscany. There’s actually very little time spent on the remodeling itself in the film though as it really wasn’t the director’s focus.

There are parts of Under the Tuscan Sun that I just didn’t like but they were few and far between. When my friend told me she was going to Italy next month, one of the first things I thought of was this film though I hadn’t seen it since it’s original premiere. Watching it again I was struck by the fact that though it’s beautiful and even funny at times, a good bit of it was lonely and sad. I almost wish that the director had thought to add more of the cooking and restoration scenes. Maybe even have Frances spend more time out and about in Italy. Then again, it would have changed a good bit of the tone of the film if that had happened.

The people in this film are only secondary to Frances’ journey of self-happiness but everyone has such a distinct personality. I liked Frances’ friend Patty that she left behind in San Francisco. She’s played by Sandra Oh whom is the lesbian partner of Kate Walsh (who plays Grace). They are probably most well-known today as their characters Addison Montgomery and Cristina Yang on Grey’s Anatomy but here they play a couple. Wells said she included this couple because she didn’t want to show just men breaking women’s hearts and that “heartbreak is an equal opportunity killer.”

It’s the people of Tuscany and the family she finds among her new friends that’s such a great part of the film however. Although she seems a little crazy, Katharine (played by Broadway Tony winner Lindsay Duncan) is my favorite character in this film. She’s supposed to embody the director Federico Fellini’s women, and some of her costumes are replicas from his films. I just love the very first shot of her rubbing the baby duck on her face. Ironically it wasn’t this scene but the very next one that was the only part of the film I remembered from the first time I saw it which is Frances writing a postcard for one of the guys she’s on the tour with. Though he didn’t like what she had written, it’s what was probably the most evocative part of the film for me. It almost certainly comes as no surprise to anyone that it’s verbatim from the actual book (which I still haven‘t read). 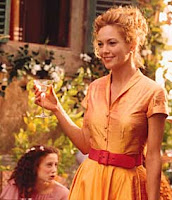 Audrey Wells did a lot for this film to be made and though she had worked on other things before (she wrote the screenplay for The Truth About Cats & Dogs, The Kid, and helped write George of the Jungle which appears as a clip in the film) this was only her second film that she has ever directed. She did an amazing job for as much as she put into this movie. I thought that she somewhat succeeded in keeping parts of it light and funny while still having the core of the film be about the main character’s inner pain. Believe me, Frances goes through a lot of pain in this film. As soon as she’s ready to pull herself out of the mud, she’s knocked back into it more often than not, which really bothered me. Thankfully, the film ends on a high note though. Ms. Wells says, “The story that Senor Martini tells Frances about the train tracks built across the Semmering pass [see below in quotes] is a true story, related to me by Austrian father. And if I had never heard that story I don’t know if I would have ever written this movie. It was the springboard and actually the reason for the film.” Under the Tuscan Sun was nominated for several minor awards and Diane Lane received a Golden Globe nomination but she nor the film won anything.

Katherine: It's a nice little villa. Rather run down, but redeemable... Are you going to buy it?
Frances: The way my life is currently going, that would be a terrible idea.
Katherine: Mm, terrible idea... Don't you just love those?

Katherine: Regrets are a waste of time. They're the past crippling you in the present.

Martini: Signora, between Austria and Italy, there is a section of the Alps called the Semmering. It is an impossibly steep, very high part of the mountains. They built a train track over these Alps to connect Vienna and Venice. They built these tracks even before there was a train in existence that could make the trip. They built it because they knew some day, the train would come.