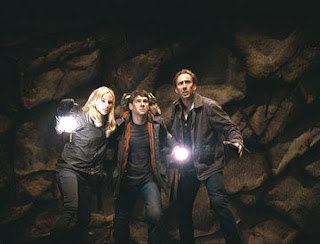 Join Nicolas Cage on a heart-pounding adventure that will have you on the edge of your seat in a race to find the Lost City of Gold. Grounded in history, imbued with myth and mystery, Disney's National Treasure: Book Of Secrets takes you on a globe-trotting quest full of adrenaline-pumping twists and turns - all leading to the final clue in a mysterious and highly guarded book containing centuries of secrets. But there's only one way to find it - Ben Gates must kidnap the President. With heart-pounding chases, close calls, and crackling humor, this high-stakes crime caper is the most exciting treasure hunt you've ever experienced

: Book of Secrets. Unlike the first film, which concentrated on America and was filmed mainly in America, NT2 is more of an international story in which the characters (and the crew) visit places like Buckingham Palace, Mount Rushmore, and even Paris. All in search of the truth behind John Wilkes Booth’s missing diary pages. 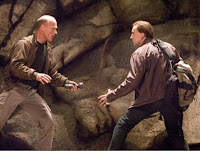 What makes this movie (and the whole National Treasure franchise) really interesting is that a lot of the “clues” and things have a real life basis. For example, John Wilkes Booth really did have a diary and it really does have several pages missing from it. Well, of course it doesn’t hurt that there are car chase and other action scenes either!

To me, Jerry Bruckheimer is the

king of great movies. I have honestly never seen a bad movie (or TV show) that he has produced that wasn’t fun, exciting, and had great actors attached to it. Speaking of great actors, National Treasure 2 has some new ones like Ed Harris (as Mitch Wilkenson) and Helen Mirren (as Ben’s mother Emily) but almost all of the previous veterans return too. My favorite character from these films is Riley Poole (played by Justin Bartha) because not only is he really cute, he’s also hilarious! Nicholas Cage and the rest

of the crew were great too.

The first National Treasure blew me away because I’ve always found history intriguing but like many people, can’t stand the dryness of real history books and prefer to read historical fiction so seeing such a funny, action packed story was incredible. I’m so glad to say that not only is the sequel just as funny and action packed, it also keeps the same overall “tone” while still providing a new experience. I just wish that there were more films like this one but since the third National Treasure (complete title and subject still unknown) isn’t due out for a few years, I guess I’ll just have to continue to read about history through fiction until then. Matter of fact, there is a series of young adult books about the Gates family through the ages by Catherine Hapka…