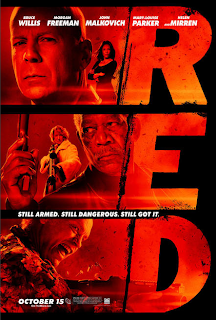 Frank (Bruce Willis) is a former black-ops CIA agent living a quiet life alone... until the day a hit squad shows up to kill him. With his identity compromised, Frank reassembles his old team-- Joe (Morgan Freeman), Marvin (John Malkovich), and Victoria (Helen Mirren)-- and sets out to prove that they still have a few tricks up their sleeves. Stand back and watch the bullets fly in this explosive action-comedy that critics call "a rip-roaring good time."

“Some thumb-sucker came along and tagged [them] RED…. Retired: Extremely Dangerous.” Those retirees; Frank Moses, Victoria, Marvin Boggs, and Joe Matheson are a team of black ops assassins who used to work together and now that someone is gunning for one of them, they’re all back in the game. These retirees are played by award-winning, veteran actors Bruce Willis, Helen Mirren, John Malkovich, and Morgan Freeman. RED is a 2010 action comedy that was shot entirely in Canada and New Orleans, this star-studded film was nominated for the Golden Globe in the category Best Motion Picture- Musical or Comedy.

This was an incredibly fun movie with lots of shoot-out scenes (Helen Mirren with a machine gun is not to be missed), witty dialogue, and some  great, but not overdone special effects (love that stepping out of a spinning car shooting move that Willis does) too. However, it was all of the brilliant actors that made me enjoy RED as much as I did. I would have enjoyed the movie more if they would have cut out the perquisite romance angle though. Willis’ character’s girlfriend Sarah Ross didn’t really add to the movie in my opinion. She stood around, sat around, and generally just got in the way. I honestly think Mary-Louise Parker tried her best but she isn’t given too much room to maneuver here. I actually wish that she had somehow been taken out of the film and Morgan Freeman’s character given more scenes than the few he does get since he’s one of my favorite actors. Personally, I thought the relationship between Sarah and Frank was slightly creepy as well. I was making the same face as John Malkovich’s character does at the end.

Speaking of which, the character Marvin Boggs played beautifully by John Malkovich. He’s this crazy guy whose not playing with a full deck and yet he’s funny, not goofy or slapstick (nothing in the film is like that even if it is a comedy). The character almost ended up being played by John C. Reilly but scheduling conflicts made it so the producers could go with their original choice. However, it was another character completely that became my favorite rather quickly and that was Helen Mirren who played Victoria. She’s so elegant, sophisticated, and deadly! Her demeanor is supposed to be based on Martha Stewart but I thought she pulled it off even better. While visually nothing like the original comic books and having moved away from the darker tone of them, RED doesn't completely forget it's source material either. The Victoria and Ivan (played by Brian Cox) story in the prequels is actually completed in the film though it would have been so much more interesting if someone could have found a way to work more of the others backstories in.

The main character I guess would be Frank Moses played by Bruce Willis and there’s just nothing I can say about him that I‘m sure hasn‘t been said before in every action film he‘s played in. Though Bruce Willis has done more than enough action films to qualify him to be in the action men hall of fame, I did think he brought a bit of difference to his role here because he’s not trying to deny that he’s getting old (or passing the reins to someone younger) but he can still kick young guy butt when needed to. Karl Urban (who plays the current CIA guy William Cooper whose been ordered to kill Willis’ character) gets his butt handed to him! Urban said that getting to fight Willis was “the most fun [he] had in years.”

Overall, RED is a good story with fantastic actors that wasn’t quite as good as it could have been but still a lot of fun to watch.  A sequel has been recently confirmed so who knows? Maybe it will be even better than this one by developing the remaining characters more. I just hope that the plot will be half as good as this one and of course that all of these fantastic actors will be coming back.

Favorite Quotes
Marvin Boggs: Do you know what's wrong with this country?
Sarah Ross: They all are trying to kill us?
Marvin Boggs: Exactly!


Frank Moses: People get shot all the time.
Sarah Ross: No they don't. They get... paper cuts.
Marvin Boggs: ...I mostly get shot.