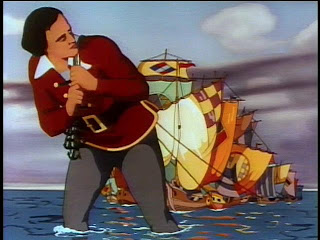 In the first feature film from the studio that brought Superman and Popeye to life, Gulliver washes ashore in Lilliput, befriends the miniature natives, and teaches the warring factions how to make peace. A pioneering animated classic, Gulliver's Travels was the second animated feature ever made in the United States.
Oscar Nominations: Best Song "Faithful Forever" and Best Original Score.

Title: Gulliver's Travels
Release: December 22, 1939
Genre: Animated- Family
MPAA Rating: G
Based On: Gulliver's Travels by Jonathan Swift
Writer: Edmond Seward, Dan Gordon, Cal Howard, Tedd Pierce, & Izzy Sparbar
Director: Dave Fleischer
Music By: Victor Young
Produced By: Max Fleischer
Distributed By: Fleischer Studios & Paramount Pictures
Run Time: 76 minutes
Gulliver’s Travels was produced in 1939 by the Fleischer studio in response to the success of Disney’s Snow White and the Seven Dwarfs. This was the tenth animated film ever but it was the first one made by an

American studio other than Disney. It has now entered into the public domain so you can watch it online for free and it’s completely legal.

I had never actually seen this animated movie before today and I actually surprised myself by liking it! A lot of the animation is kind of shoddy (the rotoscoping of Gulliver is the worst) but the songs are

beautiful (one was nominated for an Oscar) and the character Gabby is wonderful comic relief. This is by no means on par with Disney in the way of animation but the story is really good. Gulliver’s Travels is a must see if only for its historical significance but I think you'll like it too.

~ I have only seen this online.


Complete Film (In the Public Domain):