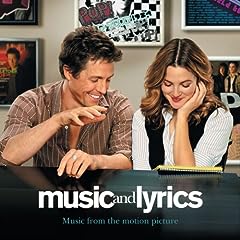 The romantic comedy Music and Lyrics is really good but the soundtrack is much better. The movie is set in present day but because it’s about a washed-up 80’s pop star, the music fluctuates between present day and like the 80’s-early 90’s. What you get is a CD you can listen to over and over again. There are actually only 4 tracks that I dislike (Entering Bootytown- Haley Bennet, Tony the Beat- The Sounds, Slam- Haley Bennet, and Different Sound - Teddybears) and unsurprisingly Hugh Grant sings all but one of the rest of the songs I like. He has such a beautiful voice!

My absolute favorite song on the soundtrack is Don’t Write Me Off and it’s one that you can listen to a million times and yet never get tired of it. The melody is beautiful and the lyrics are sweet and funny, just like the movie. I did like both of the Way Back into Love songs but the demo version is my favorite. Drew Barrymore is a wonderful actress but I never knew she could sing! My only regret is that she didn’t do more than one song. I feel like I should mention one of the other tracks I like (even if it’s the most popular one in the movie), PoP! Goes My Heart is a song that makes it utterly impossible to sit still through. You just have to get up and do something! Music and Lyrics has such a fun soundtrack and with such wonderful music, it’s a must have.