A Journey into the Land of Books 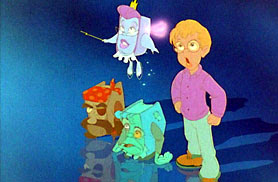 Macaulay Culkin stars in this wondrous tale of adventure and fantasy which sends a young boy into the pages of the world's greatest stories.

Seeking refuge from a storm, timid Richard Tyler enters an empty library only to be swept away into the magical animated world of The Pagemaster. It's a timeless place of wonder and discover where legendary characters from literary classics come alive. Richard meets the infamous "Dr. Jekyll and Mr. Hyde" and comes face to face with the mighty "Moby Dick," the treacherous pirates on "Treasure Island" and a giant fire-breathing dragon. Guided by a trio of talking books- Adventure, Fantasy and Horror- Richard must conquer his greatest fears before he can find his way home.

I love to re-watch a movie that I haven’t seen in years and can only recall the bare bones of the story. It’s like (almost) watching it for the first time. Sometimes I’m disappointed when re-watching an old childhood favorite; other times I’m just as enthralled as the day I first watched it. Thankfully, that’s what happened to me when I watched The Pagemaster for the first time in at least 10 years.

I can’t tell you what exactly it was that I loved so much about this movie but I’m sure it’s because it takes place inside a library, it starred two of my favorite actors from when I was a kid (Macaulay Culkin and Whoopi Goldberg), or it might even be because it mentions and even brings to “life” some of the greatest classic stories like Treasure Island and Alice in Wonderland. Actually, I’m lying; I know why I loved this movie so much (and still do). The books in the movie come to life and considering how much I’ve always loved to read I’m still waiting for my own adventure… Richard Tyler (Macaulay Culkin) you lucky dog!

Honestly, the only thing I disliked about The Pagemaster was that there were only two songs in the film and neither was all that great. With all the bad reviews I keep finding you would think this was the worst movie ever! I do think the film could have been better but I liked it anyways.

~ I have seen the DVD. The color is better than what you would find on most VHS’ but the bonus features are lacking. There are two trailers, a music video for the “theme” song, and an almost 30 minute Making of The Pagemaster featurette which I really liked, even if it was mainly a promotional tool.