Chomping All the Way! 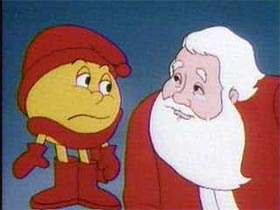 Santa Claus and his reindeer crash land in PacLand on Christmas Eve and lose all the gifts they were going to deliver all over the world. The Pac-Family help them recuperate and Santa tells them the meaning of Christmas. Pac-Man and Chomp-Chomp search for the gifts, only to see the Ghost Monsters have found them first. Will they get the presents on time for Santa to deliver them?

Most people know about the Pacman video game (unless they live under a rock) but did you know that it was a cartoon TV series in the early 80s? It only ran for two years before it was cancelled but it still managed to get it’s own Christmas special called Christmas Comes to Pacland. 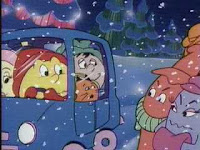 The Pac-man cartoons were a bit before my time so I had never even heard of them, much less knew that there was a Christmas special but to be honest it wasn’t that great nor something I would probably watch again.

The animation is probably this Pac-man’s only redeeming quality. I just loved Pac-man’s dog Chomp-Chomp and Pac-Baby was pretty cute too. I usually enjoy anything by Hannah-Barbera but this time I have to say that they should have just left the Christmas specials to Rankin/Bass.
There isn’t too much information available about Christmas Comes to Pacland but Wikipedia has an entry about the Pac-man TV series and mentions it. There is a complete plot synopsis on the Christmas special wikia site too but it includes spoilers. Also imdb.com has their page on this as well.