This is Definitely Not Going Anywhere! 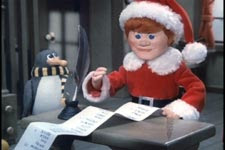 The story of how Santa Claus came to be is brought to life through the magic of stop-motion animation in this Christmas-themed production for the family. A friendly postman (voiced by Fred Astaire) explains how friendly Kris Kringle (voice of Mickey Rooney), a foundling taken in by a family of toymakers, took it upon himself to bring some happiness to the children of Sombertown, despite the grumpy opposition of Burgermeister Meisterburger (voice of Paul Frees) and the Winter Warlock (voice of Keenan Wynn).

You better watch out, you better not cry, and I’ll tell you why: Santa Claus is Coming to Town! Everyone knows that when Christmas comes to town, so do the Christmas specials and none so good (or as many!) as those by Rankin/Bass. When it comes to the tale about Santa and how he became who he is today though not one film has ever come close to being as good as this certain one. 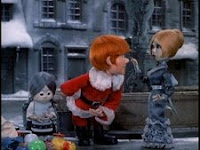 As you may have noticed, the Rankin/Bass producers sometimes got famous actors at the time to voice a few of their main characters in their specials but in this particular Christmas special, they had not one but two distinguished actors! The brilliant Mickey Rooney voiced Kris Kringle, later known of course as Santa Claus (a role he was to reprise in two other Rankin/ Bass features) and the legendary Fred Astaire as the narrator S. D. Kluger.

Oh and you can’t get any better than Put One Foot in Front of the Other and such other great songs like Fred Astaire singing the classic Santa Claus is Coming to Town title song. I also love how the stop-motion animation is still able to hold it’s own against newer films almost 40 years later.

If you would like more information on this classic Christmas special the Christmas special Wikia has an entry and so does Wikipedia (both have little known trivia). Of course the Rankin/Bass website also has a page on this film as well.