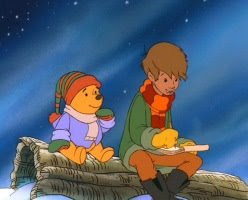 Rabbit, Eeyore, Tigger, Piglet, and Christopher Robin draw up a Christmas list and send it to Santa Claus. They left out one little detail though -- they forgot to ask Pooh what he wants. Since Christmas is tomorrow, poor Pooh must rush to get the letter back, add his gifts to the list, and go to the North Pole to give the letter to Santa personally. While Pooh is away, his friends decide that the best present in the world is to spend the holidays all together.

In the early 90’s the Disney Channel produced quite a few animated TV shows but none were as popular as The New Adventures of Winnie the Pooh. Re-runs were shown as recently as 2006 after the original show was cancelled. Because of the huge audience response, quite a few holiday

specials have been made in recent years. Especially for Halloween and Christmas! One of the best ones was Winnie the Pooh and Christmas Too although you can only find it now on DVD edited and released as A Very Merry Pooh Year.

Who could resist “silly ol’ Winnie the Pooh” ? Certainly not me! I just adored this cartoon as a kid and I actually still have the coloring book based on this Christmas special. ABC decided to show it this year along with several other wonderful Christmas specials but unfortunately, they showed the edited version that cuts a few minor scenes to fit the required 30 minute length. 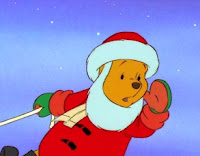 I just love how big-hearted Pooh is! He’s not even worried about his present once he realizes that his friends won’t get what they asked for and although it takes everyone else to realize the true meaning of Christmas, they eventually come around too. Hopefully next year we’ll get to see the whole thing on TV!

If you would like more information on Winnie the Pooh and Christmas Too please check out the Wikipedia article and imdb.com as well.