You're a Great One Mr. Grinch 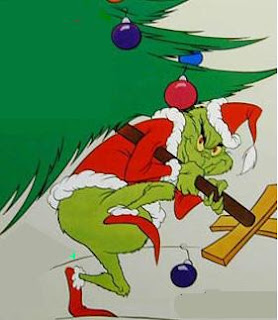 "Every Who down in Whoville liked Christmas a lot." And every family likes How The Grinch Stole Christmas! a lot! This joyous, heart-tickling holiday event based on Dr. Seuss' beloved book and featuring the voice of Boris Karloff has delighted viewers of all ages since its 1966 debut. The fun begins when the grumpy, grouchy, Yule-hating Grinch plots to ruin the Who's Christmas. Can he steal their holiday spirit by stealing their holiday treats? Or does Christmas...perhaps...mean a little bit more?

Theodor Suess Geisel, better known as Dr. Suess created many books in his day that have not only withstood the test of time, they’re still read and loved by millions of children the whole

world over. Several of his more popular books were even made into movies but none of them are as wonderful as How the Grinch Stole Christmas.

There are just so many things I love about this film! The wonderful voice talent, the utterly unique nonsense songs, and Chuck Jones’ animation makes this fabulous Christmas special something that I simply have to watch every year! 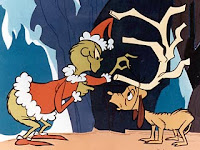 Ravenscroft (most famous as the Frosted Flakes mascot Tony the Tiger) as the narrator and singer? Of course you can’t! These two men are just as an essential part of what makes How the Grinch Stole Christmas as the wonderful songs such as my favorite, You’re a Mean One Mr. Grinch are.

Every year families gather around the TV to see and hear time and time again this animated classic, (myself included) and I can’t properly explain why this little cartoon has lasted more than 40 years but maybe the fact most of us start feeling a little Grinchy ourselves right before Christmas gets here may have something to do with it! We may not be eating Roast Beast when the 25th rolls around but hopefully everyone’s Christmas isn’t just from a store.... hopefully it’s “a little bit more”.

~ If you would like more information on How the Grinch Stole Christmas there are Wikipedia entries on the animated movie, the live-action movie, and the book too.

Here is the link if you would like to read the original Dr. Suess story and the complete film is available on Tudou.