Pull Up an Ice Block and Watch! 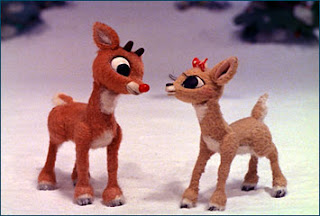 Rudolph the Red-Nosed Reindeer recounts the tale of a shy, young reindeer whose Christmas spirit is dampened because his shiny red nose has made him the laughing stock of all Christmastown. Frustrated by their inability to fit in, Rudolph and his friend Hermey, the Elf who wants to be a dentist, set out on their own. However, they soon find themselves pursued by the Abominable Snowmonster. They flee to the island of Misfit Toys in the Arctic wilderness where Yukon Cornelius, a prospector they meet along the way, comes to their rescue. Returning to Christmastown, they learn that bad weather may cause Christmas to be canceled. But Rudolph's headlight--his illuminated nose--saves Christmas by serving as a beacon to guide Santa's sleigh. 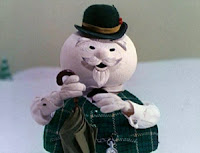 them are as loved as Rudolph the Red-Nosed Reindeer. Not only is it one of the world’s longest running Christmas specials but its actually inspired several sequels too. This is simply a must for everyone of any age that has ever felt like a misfit.

I’m just amazed at how well Rudolph has withstood the test of time! Most older cartoons look so fake nowadays compared to what we’re used to seeing that it’s hard to let yourself get completely lost within the movie but not Rudolph! There are even parody commercials for Aflac insurance that mimic this beautiful film made this year.

I could continue going on and on about the stop-motion animation that Rankin/Bass are best-known for but I’d much rather talk about how wonderful the songs are. Burl Ives, who plays the Snowman Sam sings what have now become Christmas staples, Have a Holly Jolly Christmas and Silver and Gold but there are also other good songs like We’re a Couple of Misfits and The Most Wonderful Day of the Year which is sung by the inhabitants of The Island of Misfit Toys.

For more information on this great film check out these links: the Wikipedia articles on this TV special and Rudolph himself, the Rankin/Bass Rudolph website (which includes tons of interesting photos), and the Wikia Christmas Special article too. Also for a great download of the soundtrack go to Children’s Records and More and a recent podcast with the cast.