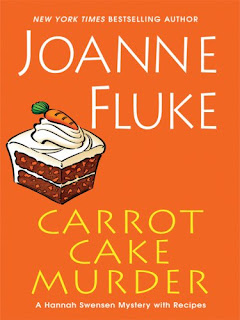 Summertime has finally arrived in Lake Eden, Minnesota, and Hannah Swensen, owner of The Cookie Jar bakery, is looking forward to warm, lazy days, eating ice cream, and sharing picnics with friends. But when a family reunion takes a deadly turn, it's up to Hannah to find a killer... Between baking up a storm for The Cookie Jar and unraveling the mystery of her cat Moishe's recent strange behavior, Hannah Swensen has a lot on her plate. But she'll always make time for her business partner, Lisa, who's in the midst of preparing for a big family reunion. Everyone is delighted when Lisa's long-lost uncle makes a surprise appearance. No one has heard from Gus in twenty-five years--and his arrival has everyone buzzing with excitement.

Uncle Gus is immediately the hit of the reunion, telling tales of his great success and flashing money for all to see. He's almost as popular as Hannah's scrumptious carrot cake, which is also Gus's favorite dessert. But the next morning, as the whole family gathers for the group photo, one person is missing. Hannah offers to track down Uncle Gus, but her search leads to a shocking find. Over by the bar at the pavilion, she spots two slices of her infamous carrot cake, frosting-side down on the floor--and Gus's corpse with an ice pick jutting out of his chest!

A little snooping reveals that not everyone was celebrating Gus's return. And when Hannah unearths more secrets from Gus's past, she discovers even more people with an axe to grind. Now Hannah's got to sift through a long list of suspects to find a killer--even if it could mean a recipe for her own demise...

Includes 12 original dessert recipes for you to try!

Like many cozy mystery writers, Joanne Fluke started off writing romance and eventually

moved on to thrillers but having always loved baking; she wanted to do a cookie cookbook with little stories based on towns and people from her home state of Minnesota. Thanks to a suggestion from her editor, she instead started writing a culinary cozy mystery series that includes delicious recipes and has recently reached the tenth book with Carrot Cake Murder, though there are many more on the horizon.

I’ve been reading Fluke’s Hannah Swensen series for almost three years now and I still get just as excited when a new one comes out. They’re some of my favorite cozy culinary mysteries… actually; her books introduced me to this wonderful genre! Mysteries good, food great, what’s not to love? Hannah is a really strong character and while most of the time I could care less about finding the killer, I love the sleuthing Hannah has to go through (and the dangerous situations she faces). 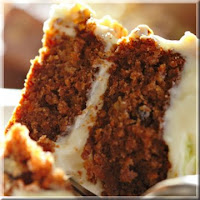 Despite how much I do love this series, the old-fashioned courting of Hannah by her two love interests Mike and Norman has started to get old. I’m certainly not alone in this either with reader support for each guy drawn right down the middle (personally, I think Norman is a better match). Ms. Fluke, we’re ten books in (not counting those short stories in the Sugar in Spice and Candy Cane Murder anthologies) so please PICK ONE ALREADY!

I seriously wish that I had a local bakery like Hannah’s Cookie Jar but since I don’t, I’m so glad that there are tons of great recipes in every book. I think out of all the recipes from this series that I’ve tried, only two didn’t come out good but the others were scrumptious! The titled Special Carrot Cake looks oh, so, yummy but I'm the only one who would eat it so now I’ve got to decide which one of these to make: the Viking Cookies, the Cocoa Fudge Cake, or the Red Velvet Cookies. All of them sound so yummy!