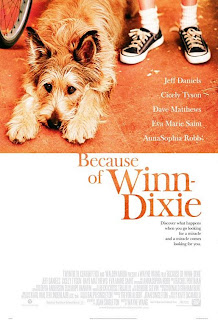 Based on the best-selling book, Because of Winn-Dixie is the heartwarming "tail" of a young girl (AnnaSophia Robb) whose life is changed by a scruffy, fun-loving pooch she names Winn-Dixie. The special bond between them works magic on her reserved dad (Jeff Daniels) and the eccentric townspeople they meet during one unforgettable summer.

little girl new to town and the dog she finds in a Winn-Dixie grocery store causing chaos in the 2005 film Because of Winn-Dixie. Based on the modern classic, award-winning book of the same name by Kate DiCamillo, this rather simple story translated to the screen very well. Especially since it stayed very close to the DiCamillo’s original book and had the “same kind of dramatic structure” as well.

they call me Lunchmeat”) in her very first starring movie role opposite Jeff Daniels (101 Dalmatians) who plays her father the preacher. For only an 11-year-old girl, she was a total natural and according to her cast mates, quite the professional too. However, the real star of this picture may not have gotten top billing but he sure did make the movie what it is and that was Winn-Dixie himself. He was played by two rare French breeds called Picardy Shepherds named Lyco and Scott. Can’t forget the fabulous Dave

Matthew who plays the pet shopkeeper Otis either as one of the most amazing moments in the film happens in his store.

Besides the dog, of course what makes this film really special is the setting. I think Jeff Daniels said it best, “"There's just a different feel in the South that I think Wayne captures real well, not only in how he pulled the performances off, but also in the look." The really tiny town is run-down, neglected and just plain lonely but as Opal shows in her drawings over the course of the film, Winn-Dixie and her really bring it back to life. “Winn-Dixie was better at making friends than anyone I had ever known,” and in doing so

Opal finally gets those friends she was praying for.

Because of Winn-Dixie isn’t a preachy movie (we never even learn what denomination the preacher is a part of) but it is a good family film even with some of the dumbed-down parts (the cop for example- totally unnecessary). Opal tells Otis “Music is better if someone's listening,” at one point in the film and that’s equally true for book to movie adaptations. They’re always better when the director has read and loved the book because then they can really capture the essence that the author has created- just like this film does.