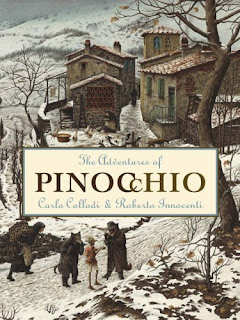 Italy's most famous fairy tale- the adventures of a mischievous puppet who becomes a real boy.

Pinocchio plays pranks upon the kindly woodcarver Geppetto is duped by the Fox and the Cat, kills the pedantic Talking Cricket, and narrowly escapes death, with the help of the blue-haired Fairy. A wooden puppet without strings, Pinocchio is a tragicomic figure, a poor, illiterate, naughty peasant boy who has few choices in life but usually chooses to shirk his responsibilities and get into trouble. This sly and imaginative novel, alternately catastrophic and ridiculous, takes Pinocchio from one predicament to the next, and finally to an optimistic, if uncertain, ending.

Florentine author Carlo Lorenzini or as he his more commonly known Carlo Collodi, wrote one of

the initial stories for the first Italian newspaper for children between the years 1881-1883 that became world famous and it was called Storia di un burattino (The Story of a Marionette) or Le avventure di Pinocchio (The Adventures of Pinocchio).Collodi, respected though he was for his contribution to the then new genre known as children’s literature, however died unaware of the immense popularity of his little puppet in 1890. Exactly 50 years later, a man called Walt Disney made Pinocchio his second animated film and because of this, the “little wooden head‘s” story has continued to endure the years unweathered.

illustrated by almost as many people as well. The copy of the story I read was illustrated by the Italian painter Roberto Innocenti and it was he in all honesty that made me continue to read the story. While Pinocchio’s rascally rude cheekiness might have been cute to some people, his constant tantrums not only bored but annoyed me as well.

True, it is a allegorical story that reflects the values of the era by putting the main character into situations where if he does something good (like getting an education or working for a living) he gets something good in return but if he does something bad (like listening to false friends, skipping school, etc.) or even careless then he’ll also be paid back in kind. A fairly common theme in children’s literature at the time, it was nevertheless not

that great of a story and in all honesty, I much preferred Disney’s loose adaptation.

Speaking of which, my favorite character in the film was of course Jiminy Cricket (voiced by Cliff Edwards) who is known in the story as only the Talking Cricket, Pinocchio actually kills him after a lecture on doing nothing but playing (“you‘ll become a perfect donkey“). I do believe that Disney’s is the only adaptation of Collodi’s story I have seen although there are of course many, many more including a musical starring Mickey Rooney (1957), a stop-motion animated series by Rankin and Bass, a Jonathan 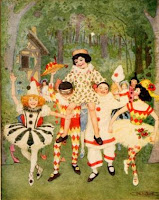 Taylor Thomas one in 1996, and Disney even made a live-action one for TV called Geppetto in 2000 starring Drew Carey. These are just to name a few and I’m not even including the ones where Pinocchio is a minor character (like in the Shrek films).

The story of Pinocchio has inspired people the whole world over (there are even derivatives of the novel and “sequels”) and just because I didn’t care for it doesn’t mean you or your children won’t love it. If anything else, it was remarkable enough for me just to see where the Disney movie ideas came from… not to mention the now common conception of a liar’s growing nose.