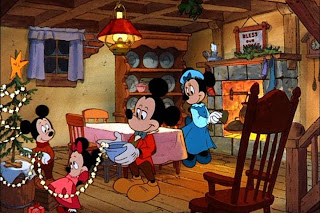 In this heartwarming remake of Charles Dickens' "A Christmas
Carol", Disney's version of the timeless classic is told. Mickey plays
Bob Cratchit and Scrooge Mc Duck plays, of course, Scrooge who is visited by
three ghosts on Christmas Eve as they try to make him mend his ways.

If Twas the Night Before Christmas is the most famous Christmas poem, then Charles Dicken’s

A Christmas Carol is the most famous story. Published during the holiday season in 1843, it has always been one of his most famous works- it’s also one of the most adapted stories for Christmas. There have been operas, plays, TV shows, and especially films made based on this little story almost as soon as it was originally written! Just about every film studio has made their version too… including the Disney studio in 1983’s Mickey’s Christmas Carol.

Mickey Mouse is to Disney what peanut butter is to jelly but for some reason this was the first Mickey short cartoon in 30 years (the last had been The Simple Things in 1953) and he plays more of a cameo role because Scrooge will always be the main focus of the story. The film was nominated for an Academy Award for Best Short Film, Animated but lost to Sundae in New York though. Many of the critics weren’t very impressed with Disney’s Christmas special but even if I do wish it were a little longer; it is still a very pleasant experience during the busy holiday season.


Hear what these two Scrooges Thought: