A Story from the Forest 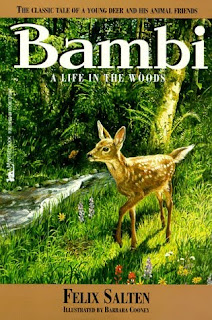 Bambi's life in the woods begins happily. There are forest animals to play with-- Friend Hare, the chattery squirrel, the noisy screech owl, and Bambi's twin cousins, frail Gobo and beautiful Faline.

But winter comes, and Bambi learns that the woods hold danger-- and things he doesn't understand. The first snowfall makes food hard to find. Bambi's father, a handsome stag, roams the forest, but leaves Bambi and his mother alone.

Then there is Man. He comes to the forest with weapons that can wound an animal. He does terrible things to Gobo, to Bambi's mother, and even to Bambi. But He can't keep Bambi from growing into a handsome stag himself and becoming... the Prince of the Forest.

Written in 1923 by Austrian native Felix Salten it took five more years before Bambi, A Life in the Woods was translated and made it to American audiences. It was recognized as a classic very early on by critics but over the years the fact that it was a book has been largely forgotten because of the immense popularity of Walt Disney's animated adaptation in 1942. Felix Salten did write a sequel to his most well known story called Bambi’s Children a couple of years before Disney released their version of Bambi. 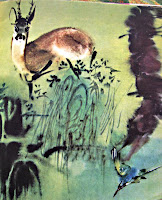 between two leaves. The rest of the story is amazing of course but it's this conversation that truly shows the poetic genius of the author. "Can it be true," said the first leaf, "can it really be true, that others come to take our places when we're gone and after them still others, and more and more?" "It really is true," whispered the second leaf. "We can't even begin to imagine it, it's beyond our powers." "It makes me very sad," added the first leaf. They were very silent a while.’

Disney’s Bambi was one of my favorite movies as a kid but I didn’t realize it (and many other Disney films) was based on a book until I ran across it in my middle school library. Like it's movie counterpart, Bambi is a story that will stick with you years after you've read it. However, this was written with adults in mind though many children enjoyed it even if they didn‘t pick up on

some of the deeper meanings. As a matter of fact, during World War II a good majority of the books were burned "as political allegory on the treatment of Jews in Europe." The first time that I read this I didn’t get any of these deeper messages in the story so I’m really glad I decided to re-read it.

Like many of Felix Salten's other novels (two of which were also made into Disney movies: Perri and The Shaggy Dog based on The Hound of Florence), there is an environmental and anti-hunting message that at times can be a bit grim. Bleak at times though it may be, there is so much beauty in the book and the ‘circle of life’ theme is very prevalent too.


First Paragraph: He came into the world in the middle of the thicket, in one of those little, hidden forest glades which seem to be entirely open but are really screened in on all sides. There was very little room in it, scarcely enough for him and his mother.

Links
Author and Book's Wikipedia pages
Complete Conversation with the Leaves
Posted by Ladytink_534 at 10:14 PM