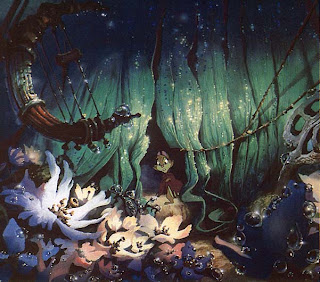 Heartwarming, enchanting and beautifully crafted, this magical cartoon fantasy ushered in a new era of dazzling animation! "Gorgeous to look at" (Times). The Secret of NIMH will "delight kids everywhere" (Newsweek).

This animation extravaganza is based on Robert C. O'Brien's award-winning story of Mrs. Brisby, a timid mouse who becomes a heroine in spite of herself. Struggling to save her home from Father Fitzgibbon's plow, Mrs. Brisby gets help from a colorful menagerie of local critters including a wonderfully klutzy crow, a wise owl, and some highly intelligent rats. You'll be mesmerized by the Oz-like kingdom of the rats, their charming leader Nicodemus and the climatic showdown between two swashbuckling "ratversaries!"

The fun, drama and suspense of this delightful tale are brought to life by the voices of Dom DeLuise, Jogn Carradine, Derek Jacobi, Hermoine Baddeley and Elizabeth Hartman. With the music of Oscar winner Jerry Goldsmith beautifully underscoring every mood, The Secret of NIMH is sheer delight! Share it with someone you love.

The Secret of NIMH was the first feature film for the Don Bluth studio and in my opinion it’s one of the very best animated classics. I’ve always loved this movie so much. It has all the action, drama, and even comedy you would find in a live-action movie but because it’s animated I think it’s even more entertaining. When I was younger, I picked up the books it was based off of by Robert C. O’Brien and his daughter and although it’s been probably ten years I still remember bits and pieces of the books. I think it’s time for a reread!

Some would argue that, "because it has so many characters and involves them in so many different problems that there's nobody for the kids in the audience to strongly identify with" but I heartily disagree! That’s one of the reasons I’ve always liked The Secret of NIMH because it featured such strong, distinctive characters that are voiced by very talented actors such as Derek Jacobi (Nicodemus), Dom DeLuise (Jeremy the crow), and the late Elizabeth Hartman (Mrs. Brisby). 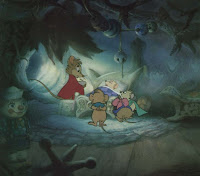 This was actually the first Don Bluth film where Dom DeLuise voiced a character and because Bluth liked him so much he went on to voice three more characters in his later films, Tiger (An American Tale), Itchy (All Dogs Go to Heaven), and Stanley (A Troll in Central Park). He even did the voices for his characters in follow-up sequels (an almost unheard of practice), including the direct-to-video sequel The Secret of NIMH: Timmy to the Rescue.
~ I own a VHS copy of this film, there has been a release of a "special edition" DVD but since it has no bonus features other than the original trailer (it also comes with a booklet), I’m not buying. Note: Quote from Roger Ebert’s review of the movie.
Find NIMH Online
Imdb.com
Wikipedia
Links
NIMH Archive
NIMH fan Site
Here are the Song Lyrics
Trailer: