Get Out Your Roller-Skates! 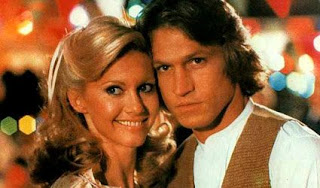 XANADU is a look at the future and a loving remembrance of the way things were in the heyday of Hollywood. The musical score includes the hit songs "Magic," "I'm Alive," "All Over the World," "Suddenly," and the title sone "Xanadu." Olivia Newton-John will dazzle your senses with her luminous beauty and fabulous voice. She and Gene Kelly star in this mesmerizing musical fantasy. The '40s meets the '80s in XANADU, a very special love story and the first lavish, old-fashioned musical to utilize today's music.

Xanadu is not my favorite musical by any means but it does have an amazing soundtrack, incredible (for it’s time) special effects, good actors, and really great choreography. It’s kind of hard to believe that the movie was such a flop (although it has since become a cult classic and there are many fan-run websites today) but I have no trouble believing that the soundtrack was

such a great commercial success. I own both the movie and the soundtrack and guess which one gets played more often?

Really though, I do enjoy watching the film every

once in a blue moon mainly because it features Olivia Newton-John (who I adored in Grease and is the whole reason I discovered Xanadu in the first place) as Kira, and Gene Kelly, who plays Danny Maguire. Well it also features Michael Beck as the leading male Sonny Malone but I still don’t really know who he is and his performance wasn’t that great. Gene Kelly is terrific in his very last film role, not only does he sing and dance, he also roller-skates!

Besides the fabulous music (that I’ll still be singing until at least next week) my other favorite thing about Xanadu is the short animated sequence by Don Bluth. It’s such beautiful work and it fits the dreamy, fantasy song "Don’t Walk Away" perfectly. I’ve heard it said that some of the sequence resembles one of Bluth’s later films Thumbelina but to me it has a Disney feel to it. Kind of like Peter Pan and The Sword in the Stone but it’s still overall a recognizable bit of Don Bluth’s fabulous animation.
~ I own the VHS of Xanadu. I’ve heard that there is a DVD but it’s not worth buying except for the (barely) enhanced quality of the picture and the sound. Universal could make some money off of the movie now if they released a special edition DVD, especially with as many nostalgia nuts running around as there are!