A Tail of the American Dream 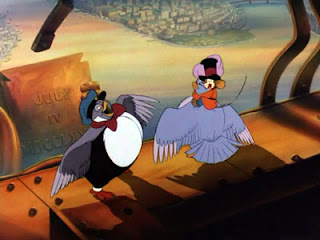 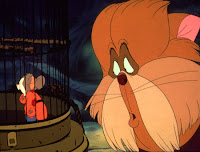 the original, even though Don Bluth (who is my favorite director) was not involved in making it. That’s not to say that this isn’t a great animated classic, because it is but I think there were just too many people involved in making the final decisions on the actual film.

One of the reasons why this film did work though and why it captured the interest and hearts of all that saw it, other that the fact Don Bluth

directed it of course, was that Mr. Bluth had one of his best voice actors Dom DeLuise, on board as the voice of Tiger the cat. It is a role that he has reprised in every sequel to An American Tale, and that’s including the TV cartoon Fievel’s American Tales.

I’ve always thought it was kind of cool that this actually was the first animated film to ever beat out a Disney animated movie (The Great Mouse Detective) in theaters. The next Bluth movie was The Land Before Time and it managed to surpass another

Disney animated movie as well(Oliver & Company). Which of course made the Disney company realize that they actually had competition and caused them to work harder on their films, resulting in Disney’s The Little Mermaid and several more wonderful films. So in a roundabout way, Don Bluth is partly responsible for some of my favorite animated movies and this gives me even more reason to love him.