It All Started With a Cat 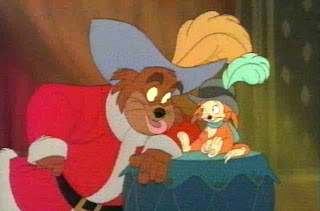 The classically animated film made in a garage that kick-started Don Bluth, Gary Goldman & John Pomeroy's independent animation careers was in production from 1975 to 1979, this is the little film that attracted financing for The Secret of NIMH, ushering in the second Golden Age of Animation. The team went on to produce and direct the 1983 animated arcade game Dragon's Lair, and the hit movies, An American Tail, The Land Before Time, All Dogs Go to Heaven and Thumbelina.

Banjo is your average young cat, with major growing pains. When one of his own pranks backfires, Banjo decides to run away from home instead of facing his parents. He winds up in the big city where he meets cool cats Crazy Legs (Scatman Crothers) and Zazu (Beah Richards). Yet the good times (late night musicals) and the bad times (dogs!) only make Banjo realize all he has left behind. With the help of his new friends, he sets off to find his way back to where he really belongs- home with his family. Featuring original music and songs, this delightful tale is heartwarming animated for the entire family.

Before Anastasia, before The Land Before Time, even before The Secret of NIMH (which this film bears more than a slight resemblance to) there was Banjo the Woodpile Cat. It was the very first thing Don Bluth and his partners did when they left the Disney studio. For a first try it’s not that bad but as a Don Bluth fan, I can honestly say it isn’t on par with his later works.

I was impressed with the voice actors though. You can tell sometimes that they directly influenced the facial expressions of the characters, especially with Crazy Legs (Scatman Crothers) and Zasu (Beah Richards). Other times though, you can barely tell that these are supposed to be cats

! Poor Banjo, if it weren’t for the other cats to bolster the story along, he would have seemed even flatter to me than he already is. At least the backgrounds are detailed and beautifully drawn for the most part and the songs are catchy (but nothing to brag about).

~ I watched a VHS copy of this rare film. I think the color was a little off but it was still in remarkably good condition. I don’t think there even is a DVD available!