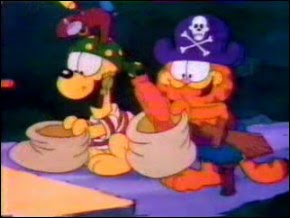 on TV in 1985 and earned itself an Emmy for Outstanding Animated Program.

I can’t say that the story is original (main characters dress up and go trick-or-treating then run into something spooky and supernatural) or that the animation is anything but ordinary but the cartoon was incredibly cute and the songs were catchy and memorable too. I especially liked What Should I Be? and Scaredy Cat.

It does sound a little strange when Garfield starts singing because you can tell that the speaking voice and the singing voice are two different people. Popular artist Lou Rawls did all the singing

parts and I guess that I’m not the only one who didn’t think it sounded right because he never sang for Garfield again. The person who spoke for Garfield on all his animated appearances was Lorenzo Music and he continued to do so up until the day he died (he also is known for being the voice of Tummi Gummi in Disney’s Adventures of the Gummi Bears).

~Garfield’s Halloween Adventure was released on DVD as part of the Garfield: Celebrations collection in 2004. So if you’re a fan of the fattest cat around and looking for a short Halloween special then by all means pick this up for some mindless fun.