The Dalmatians are Back! 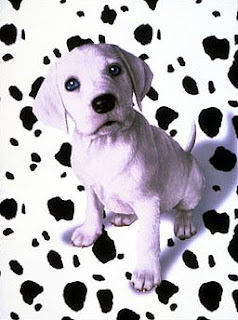 Get ready for outrageous fun in Disney's 102 Dalmatians. It's a brand-new, hilarious adventure, starring the audacious Oddball, the spotless Dalmatian puppy on a search for her rightful spots and Waddlesworth, the wisecracking, delusional macaw who thinks he's a Rottweiler. Barking mad, this disparate duo leads a posse of puppies on a mission to outfox the wildly wicked, ever-scheming Cruella De Vil (Glenn Close). Filled with chases, close calls, hilarious antics and thrilling escapes all the way from London through the streets of Paris - and a Parisian bakery - this adventure-packed tale is wacky good fun your entire family will want to howl over again and again.

films, it was decided that the live action film deserved a sequel, 102 Dalmatians. It wasn’t quite as big of a hit theatrically as 101 Dalmatians (which had been one of the top 10 highest grossing films of 1996), even with Glenn Close reprising her role as Cruella; however it did receive an Academy Award nomination for Best Costume Design.

Of all the two live action Disney films based on Dodie Smith’s The Hundred and One Dalmatians, I personally think 102 Dalmatians is the best. Not because of the plot (which even I have to admit was original) or even because of the cuteness of the Dalmatian puppies, no what makes this better than the first film is Waddlesworth. In 101 Dalmatians, the comic relief was mostly thanks to Horace (Mark Williams) and Jasper (Hugh Laurie) but in this one, it all rests one the wings of one bird who believes himself to be a dog (but he doesn‘t mimic, he talks).

There has been a lot of grumbling over the years about this sequel with many people saying it was “ridiculous” but then these same people applaud the first film, which was so full of plot holes I’m surprised the puppies didn’t fall through them. Of course being a sequel, there were some corners cut so while I still think this was better than the first film, it isn’t one of my favorites. Still, there are some great parts like the re-creation of the scene from Lady and the Tramp and Waddlesworth’s lines. I also have to give credit to Glenn Close, whether she’s Ella or Cruella she was the second best thing in this film.