Watch Before Kicking the Bucket 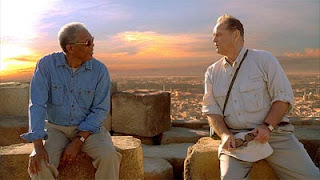 You only live once, so why not go out in style? That's what two cancer-ward roommates, an irascible billionaire (Jack Nicholson) and a scholarly mechanic (Morgan Freeman), decide when they get the bad news. They compose a bucket list -- things to do before you kick the bucket -- and head off for the around-the-world adventure of their lives. Sky-dive? Check. Power a Shelby Mustang around a racetrack? Check. Gaze at the Great Pyramid of Khufu? Check. Discover the joy in their lives before it's too late? Check!

Under the nimble direction of Rob Reiner, the two great star provide the heart and soul, wit and wiles of this inspired salute to life that proves that the best time of all is right now.

The same year that both legendary Oscar winning actors Jack Nicholson and Morgan Freeman turned 70 years old, they appeared in their first film together The Bucket List. The drama-

comedy garnered mixed reviews when it first came out especially by renowned critic Roger Ebert who was disgusted at the way cancer is treated as a "laff riot". However, there were quite a few people that liked the film and it's epiphany that you should live in the moment, no matter how clichéd that is.

I've always liked Nicholson but Morgan Freeman is one of my

favorite actors so I had very high hopes for the film- thankfully, it didn't disappoint! I laughed and I cried, and then I laughed some more. As great as these two actors are, I was almost expecting one to outshine the other but there is a good reason why both men are Academy award winners. They play off of each other very well and Sean Hayes was a really good edition to the cast too.

Would I have liked this film half as much if Freeman had been replaced with another actor of a lesser caliber? Probably not but it came as of no shock at all that he was first choice for the part. Could it have been better? Of course! There were tons of beautiful locations that were just green-screened to save time and money plus the cavalier attitude about dying while it made some people think, it made others angry but what it boils down to at the end is that The Bucket List was a good movie. Rather than about dying, it was ironically, an aspiring film about living.