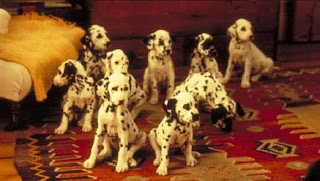 Unleashing every ounce of Disney magic, 101 Dalmatians thrills audiences of all ages with fast-paced adventure and comedy -- featuring a brilliant performance by five-time Academy Award nominee Glenn Close (including Best Actress, Dangerous LIASONS, 1988) as Cruella De Vil. Achieving new heights of hilarity, Disney's all-time classic puppy tale comes to life as a worldwide box office sensation. In their small London flat, Dalmatians Pongo and Perdy, and their human "pets" Roger and Anita, are overjoyed by the arrival of 15 puppies. But when the spotted-fur-loving Ms. De Vil and her clumsy cohorts, Jasper and Horace, dognap the litter -- along with every other Dalmatian pup in London -- Pongo and Perdy must rally the town's animals to the rescue. The plan hurls them towards a thrilling climax filled with uproarious moments as the puppies attempt to outwit their captors and bring on a final showdown with Cruella!

Packed with one of the largest and cutest collections of puppies ever brought to film, 101 Dalmatians also features a superb cast of talented humans, including Jeff Daniels, Joely Richardson and Joan Plowright.

In 1961, the Walt Disney Company brought Dodie Smith’s The

Hundred and One Dalmatian’s to the screen in beautiful Technicolor animation. Thirty-five years later, they brought it back in a new format: live-action. Although this first live action 101 Dalmatians film claims to be based on Ms. Smith’s story, it is actually based on the original Disney animated creation, including using dialogue directly from it.

es of all time: Cruella de Vil. Even though Dodie Smith did create her first, Davis gave her a different look, a more flamboyant attitude and in my opinion, made her even scarier. How anyone would ever be able to impersonate her in a live action film was going to be a challenge, if not down right impossible, yet Glenn Close took Cruella to a completely new level. Sure, she’s not as amazing as the

animated Cruella, but she almost is. However, she’s still not the star of the film… that would be the Dalmatian’s themselves.

Another thing the film had going for it, besides the cuteness of the Dalmatian puppies, is the comedy. At times, it even has a bit of a Home Alone feel to it but that is no great surprise since the director of this film, Stephen Herek was also the director of those movies. One of the people who is the comedy relief team in the film has actually become very well known today by playing th

e main character in the TV show House. Yes, Hugh Laurie plays Jasper (although it has been said he was offered Roger’s part) with little of his sharp, cutting wit, but his presence is definitely felt whenever he is on screen and no one, not even Cruella herself dwarfs that.

with children or animals”, but films in which an animal is a main character have usually done well in theaters. There was just no way that audiences would be able to stay away from a film with so many animals (there were over 200 Dalmatians alone) in it. I know for a fact that I’ve always been a sucker for Disney dog movies myself, add in the fact that there are supposed to be 101 Dalmatians (some are computer animated, which is kind of obvious when viewing it today) not to mention the cows, raccoons, sheep, and other dogs… you could easily have a disaster on your hands but instead this film was one of the highest grossing movies of 1996. It even helped a couple of sequels (one live action, one animated) as well as an animated TV series be made too.

Related Posts: One Hundred and One Dalmatians


Cruella Behind the Scenes: