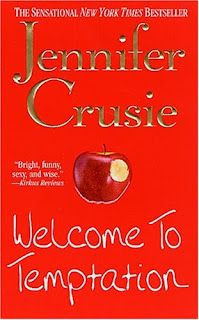 Sophie Dempsey is content living a quiet life filming wedding videos until an assignment brings her to Temptation, Ohio. From the moment she drive into town, she gets a bad feeling; Sophie is from the wrong side of the tracks and everything in Temptation is a little too right. And when she has a run-in with the town's unnervingly sexy mayor, Phineas Tucker, making a little movie turns out to be more than a little dangerous.

All Sophie wants to do is film the video and head home. All Phin wants to do is play pool with the police chief and keep things peaceful. They both get more than they bargained for when Sophie's video causes an uproar and the proper citizens of Temptation set out to shut them down.

As event spiral out of control, Sophie and Phin find themselves caught in a web of gossip, blackmail, adultery, murder, and really excellent sex. All hell breaks loose in Temptation as Sophie and Phin fall deeper and deeper in trouble...and in love.

“saucy feminist romp”, and yet at the same time, they could be describing just about any Crusie novel. As with many authors, she started off slow in the romance genre with just her character’s biting wit as her trademark but today, Ms. Crusie has stepped out of her genre pocket and become the author that most of us know and all of us love.

Jennifer Crusie is one of my favorite author’s who is supposed to fit into the genre of romance but in reality really doesn’t. Her books are more like a romantic comedy and there is even a bit of a mystery to solve in this one. 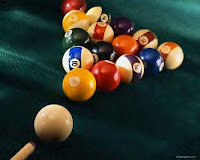 Her women may even throw themselves at their men but they don't wait around hoping and dreaming… they always go out and do something about it! Which in my mind makes the situations in the plot much more realistic but while other author’s could probably pulled off a story like Welcome to Temptation, very few could have created such quirky characters.

If I had one bad thing to say about the story was that at the beginning, Sophie thought and spoke in movie references- everything from soundtracks to quotes to allusions. It was annoying at first (mainly because I haven‘t seen a lot of the films mentioned), but I was soon able to look at as just another Dempsey quirk and it took a backseat to just how laugh-out-loud funny the book was. You can only imagine how happy I was to learn that Ms. Crusie had wrote her first (and so far, only) sort of follow-up book with Sophie’s brother Davy as the main character! 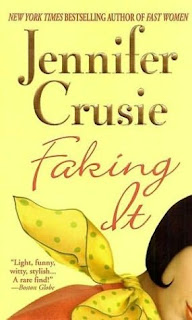 LOVE AND DECEPTION HAVE A LOT IN COMMON.
Meet the Goodnights, a respectable family who run a respectable art gallery-- and have for generations. There's Gwen, the matriarch who likes to escape reality; Eve, the oldest daughter who has a slight identity problem (she has two); and Nadine, the granddaughter who's ready to follow in the family footsteps as soon as she can find a set that isn't leading off a cliff. Lastly, there's Matilda, the youngest daughter who's inherited the secret locked in the basement of the Goodnight Gallery, the secret she's willing to do almost anything to keep, even break into a house in the dead of night to steal back her past.

THE RISKS ARE INTOXICATING.
Meet the Dempseys, or at least meet Davy, a reformed con man who's just been ripped off for a cool three million by his financial manager, who then gallantly turned it over to Clea Lewis, the most beautiful sociopath Davy ever slept with. Davy wants the money back, but more than that, he'll do anything to keep Clea from winning, including break into her house in the dead of night to steal back his future.

AND IF YOU'RE REALLY GOOD AT THEM, THEY BOTH PAY OFF.
One collision in a closet later, Tilda and Davy reluctantly join forces to combat Clea, suspicious art collectors, a disgruntled heir, and an exasperated hitman, all the while coping with a mutant dachshund, a juke box stuck in the sixties, questionable sex, and the growing realization that they can't turn their backs on the people they were meant to be...or the people they were born to love.

brand of humor, romance, and even mystery but of all her works, only Welcome to Temptation had characters strong enough for her to incorporate into a completely new story: Faking It. Ms. Crusie has made it clear on several occasions that this is not a sequel. Rather, it’s sort of a spin-off using the main character from Welcome to Temptation Sophie’s brother Davy.

Immediately after I finished the first Crusie book that had Dempsey family members in it, I dove directly into the next one. Even though Davy was only a minor character with very few scenes when the reader first meets him, his personality shines through so it was only natural for the author to write another book this time with him as one of the main characters.

Instead of movie references, Faking It goes in the other direction and is full of song references because Davy’s love interest is part of a family that loves their

music! Whether because I was already used to it or because I actually recognized some of the music, I didn’t really have a problem with it in this book. To be honest, I have to admit that of the two books with the Dempsey siblings in it, this was my favorite, mainly because of Tilda’s nutty family. If I thought the people in Temptation were quirky…!

Related Posts: Crazy for You & Agnes and the Hitman

Picture Explanations
Campaign Poster: The Tucker men have been Temptation's major for years.
Pool: There isn't much to do in the small town of Temptation so the town major is a unbeaten poolshark... until he challenges a Dempsey!
Dove Bar: Sophie eats a LOT of these.
-------------------------------
Cinnamon Bun Soap: Tilda's (and Davy's) favorite soap
Jukebox: The Goodnight family love their music...
Dachshund: The family's pet mutant dachshund Steve
Posted by Ladytink_534 at 2:20 PM