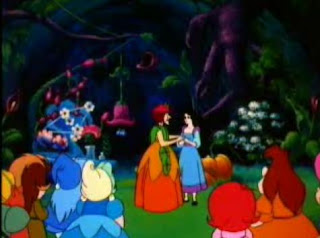 What ever happened to Snow White? Find out in this feature-length musical adventure brought delightfully to life by an all-star voice cast and breathtaking animated magic! Snow White and her Prince are busily planning their wedding when the evil Queen's wizard brother, Lord Maliss, kidnaps the Prince! Embarking on a thrilling quest to rescue her true love, Snow White enlists the help of the Dwarfelles: seven tiny, magical comical ladies. It's one thrill after another as Snow White and her courageous companions face off against the sinister Maliss and his castle-full of outrageously off beat creatures in this song-filled fairy tale that the whole family will love.

Creating an animated film takes a lot of hard work and dedication, especially when you’re thwarted at every turn. Completed in 1988, Filmation’s Happily 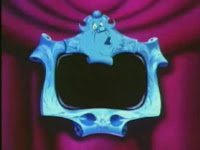 Ever After didn’t actually make it into theaters for five more years because of a Disney lawsuit (that resulted in much of the film being changed including the title) and also a licensing dispute with the distributor. It also probably didn’t help that the original Walt Disney Snow White and the Seven Dwarfs was re-issued theatrically that year either.

Magic, especially nature-type magic has always fascinated me in

movies and one of the reasons why can probably be contributed to this film. It came out in the spring of 1993 a few months after I had turned 6 years old. By this time, I had seen just about every animated movie that our local rental place owned. What did I care if it had an all-star cast or that it wasn’t very well received? All I knew was that it was animated (or as I didn’t know what that word was, cartoon), it was about Snow White and instead of the Seven Dwarfs, there were now Seven “Dwarfelles”. Now 15 years later, somehow I stumbled across an interview with Irene Cara (voice of Snow White) about th 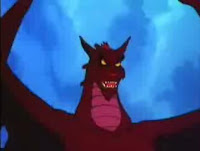 e movie and it made me want to see it again… especially since I could hardly remember anything at all about it.

My first thought was “please don’t let this be some corny, cheesy, badly animated film,” and unfortunately it was. That’s not to say that there weren’t a few good parts like some of the cute songs and certain parts of the story, not to mention the spectacular cast of voice actors like Dom DeLuise, Zsa Zsa Gabor, Phyllis Diller, Carol 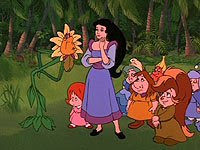 Channing, Edward Asner and more. This movie should have succeeded on their talent alone but thanks to a few badly animated scenes (Snow White changes skin tone a LOT and facial expressions not often enough plus The Prince looks a lot like He-Man), some storyline that doesn’t make sense, and a few flat, one-dimensional characters, it was received badly by the critics at the time and actually resulted in Filmation declaring bankruptcy and closing down for good. 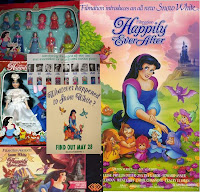 We all know how marketable movies aimed primarily at children can be so with the other animated films being released that year like The Halloween Tree (based on the Ray Bradbury story), Once Upon a Forest, Steven Spielberg’s We’re Back: A Dinosaur Story, and Tim Burton’s Nightmare Before Christmas competition was fierce. However, despite the Dwarfelles and Snow White dolls, the soundtrack, and even the video game, this movie has managed to be forgotten over time.