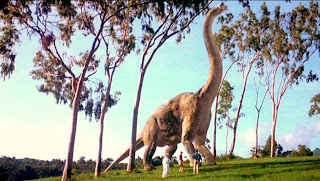 On a remote island, a wealthy entrepreneur secretly creates a theme park featuring living dinosaurs drawn from prehistoric DNA. Before opening the attraction to the public, he invites a top paleontologist, a pale botanist, a mathematician/ theorist, and his two eager grandchildren to experience the park-- and help calm anxious investors. However, their visit is anything but tranquil as the park’s security system breaks down, the prehistoric creatures break out, and the excitement builds to surprising results.

years later that was immediately the most successful film about dinosaurs ever made: Jurassic Park. This movie was directed by one of the "most powerful and influential figure[s] in the motion picture industry, used the best special effects -including the then new computer-generated imagery, and was not only the highest grossing film of 1993 but also number 11 on the list of highest

grossing films worldwide- not taking into account inflation (adjusted for inflation it falls at number 17).

There has always been a fascination with dinosaurs but this film and its book “generated a lot of interest in the study of paleontology [which] has been at an all-time high ever since-” and that’s not the only way this film has inspire people either. The

amazing special effects made films that would have been “impossible” to make actually possible like the Lord of the Rings trilogy, there are spin-off novels and continuation comic books, and there is even a ride called Jurassic Park River Adventure at the Universal Studios Hollywood and at the one in Orlando, Florida in the Islands of Adventure theme park (there is one in Japan too). 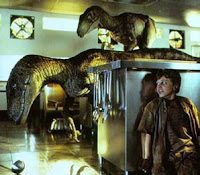 This movie was one of the very first films I remember seeing in the theater- and I remember being so scared! I have to admit that I yelped once or twice this time too. Despite the fact that it is now 15 years old, all of the special effects hold up very well and they continue to earn those three Oscars that film won for special effects and sound too. What amazes me is just how real that those dinosaurs still look (and sound)! You can almost imagine that you could go the zoo tomorrow and see them. I’ve been told that the films (and its sequels) are quite a bit different from Crichton’s books but I haven’t had the pleasure of reading them before but I would love to someday. 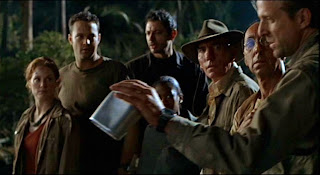 Director Steven Spielberg takes us back to the scene of Jurassic Park in The Lost World, the blockbuster sequel with even more dinosaurs, more action and more breathtaking visual effects than its record-breaking predecessor. The Lost World remains among the most successful films of all time and features an all-star cast including Jeff Goldblum, Julianne Moore and Pete Postlethwaite. It has been four years since the disaster at Jurassic Park and two groups are in a race against time that will determine the fate of the remote island's prehistoric inhabitants.

The Lost World: Jurassic Park is the sequel to the critical and commercially successful Steven

Spielberg science fiction thriller made four years previously. Like the original, it is based on a book by Michael Crichton who was in fact urged to write it by the director himself (Crichton had never done a sequel before or since). Unlike the first Jurassic Park though, the sequel had mixed reviews and it didn't win as many awards either. It was the second top grossing film of the year

(Titanic holds the first position) though!

One of the main reasons there were so many mixed reviews was because of the fact that one of the minor characters, Dr. Ian Malcolm (Jeff Goldblum) is practically the only returning character from the original film. Since he was one of my favorite characters, I had no problem with him as the leading male (Vince

Vaughn plays a tiny part as Nick Van Owen and nearly outshines him in a couple of scenes). The lead female is played by the gorgeous Academy award nominated actress Julianne Moore but her co-stars (including the non-humans) do manage to outshine her a little bit.

I felt as if the film wasn't quite as subtle as its predecessor in some aspects nor did it have the same "grand" feeling but if possible it does look a whole lot more real! Generally what The Lost World is, is a "creature-feature" with tons of chase scenes/ dire circumstances with a few funny characters as comical relief. However, the film is so interesting and spectacular; it is very hard to mind at all. 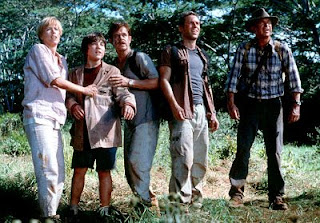 Adventure runs wild when renowned paleontologist Dr. Alan Grant (Sam Neill) agrees to accompany a wealthy adventurer (William H. Macy) and his wife (Téa Leoni) on an aerial tour of Isla Sorna, InGen’s former breeding ground for prehistoric creatures. But when they’re terrifyingly stranded, Dr. Grant discovers that his hosts are not what they seem, and the island’s native inhabitants are smarter, faster, fiercer, and more brutal than he ever imagined in this heart-stomping thriller.

thrilled audiences once every four years since 1993. However, it is the only film in the franchise not based on Michael Crichton’s books nor was it directed by Steven Spielberg. Instead, the former director passed the reins over to Joe Johnston who had directed another big budget film: Jumanji.

former director wanted to do it so he promised him this one), a lot of the majestic feeling makes it into the third film- along with even more chase scenes with bigger dinosaurs! To be honest, this was the first Jurassic Park to actually give me nightmares and its all thanks to those Velociraptors.

I thought the actors were great though, especially Sam Neill (who

returns as Dr. Alan Grant) and William H. Macy (who plays Paul Kirby). I was also impressed that for once in the series the female (Amanda Kirby played by Téa Leoni) was given a more pivotal role. Most people have either loved or hated the film but almost all agree it is better than the previous sequel. For the most part, the film is not really necessary to the storyline but I still thought it was good even if it was the only film of the franchise to not be recognized at the Academy Awards.