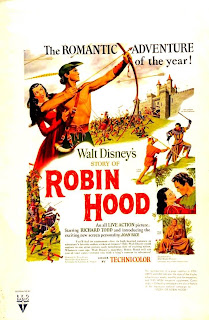 Brimming with gallantry, romance and adventure, this classic tale of England's most celebrated outlaw-patriot ranks as one of the finest examples of Disney storytelling magic.

While the noble King Richard the Lionhearted is away, the evil Prince John and wicked Sheriff of Nottingham (Peter Finch) try to seize the throne. Only the quick-witted young Robin Hood and his band of Merrie Men can fight off their attempts, save the fair Maid Marian from harm, and preserve the throne for the rightful King!

Join Robin, Little John, Friar Tuck and all the Merrie Men as they rob from the rich to give to the poor and provide rousing good entertainment. 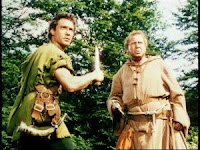 thers sometimes say he's a commoner or the complete opposite: an Earl robbed of his rightful title. He's been called 'Robinhood', 'Robehod' 'Hobbehod' and even 'Robert Hood' at times too. Nor has he (or at least those in tales passed down that had assumed his name) always "robbed the rich to aid the poor" either. For the most part however, the folklore legends and stories of Robin Hood and his band of outlaws (not to mention his lovely Maid Marian) have remained mostly the same. However, they have been re-told in numerous different ways: ballads, novels, and especially film and television. Walt Disney was one of the filmmakers to take on this legend with his film The Story of Robin Hood and His Merrie 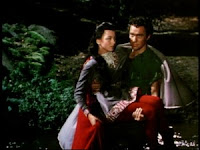 There are quite a few notable films (and TV shows or cartoons) based on the Robin Hood legend with quite a few notable actors playing the title character but I haven’t seen very many of them. Not even the Douglas Fairbanks or Errol Flynn ones that many consider to be the very best ones ever made (they came out a couple of decades before this one). Sadly, Disney’s first take on the Robin Hood story has been mostly forgotten or actually supplanted by their 1973 animated version, which was my introduction to the legend. Neither of the Disney films was particularly better than the other as they were both good but only the live action one has been

The Story of Robin Hood and His Merrie Men may have fell between the cracks of time and memory (it’s even extremely hard to buy nowadays unless on VHS but it rumored to be making its way to DVD sometime in 2009) but it’s tightly woven plot and beautiful sets and locations (it was filmed in Buckinghamshire, England near where many of the legends claim that it really took place) do withstand the test of time. So does the humor provided by some incredibly talented actors like Richard Todd as Robin 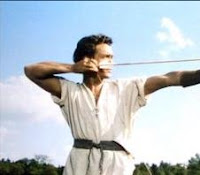 Hood who had been nominated for Best Actor at the Academy Awards a couple of years before, the inexperienced English actress Joan Rice who played Maid Marian (this was one of her only big roles in her career), the Ocsar winner Peter Finch (the Sherriff of Nottingham) who was said to have “brought sincerity... with a lot of bite [to the part]", and dozens of Merrie men too (my favorites are Little John (played by James Robertson Justice) and Friar Tuck (James Hayter), and Will Scarlet (Anthony Forwood).

This film benefits greatly from having a cast of mostly English 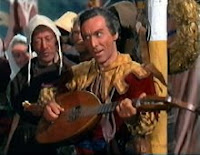 actors since it is an English film and story and it was made in England since Walt Disney couldn’t use the money he had made overseas before World War II anywhere but there. This was why he made his first completely live action film Treasure Island and also his second one: this film. It’s a brilliant film that stays authentic to the medieval time in costume, set, and most of the time action as well. This Robin Hood should have never been forgotten! “I’ve tidings to tell and new songs as well of the wonders I’ve seen far and wide.” “Oh Robin, who is called Fitzsooth is dwelling in the wood. His coat is changed to Lincoln green and his name to Robin Hood…”