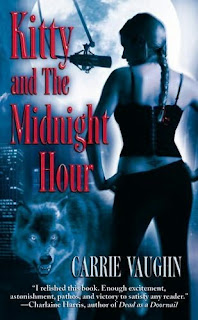 Kitty Norville is a midnight-shift DJ for a Denver radio station-- and a werewolf in the closet. Sick of lame song requests, she accidentally starts "The Midnight Hour," a late-night advice show for the supernaturally disadvantaged.

After desperate vampires, werewolves, and witches across the country begin calling in to share their woes, her new show is a raging success. But it's Kitty who can use some help. With one sexy werewolf-hunter and a few homicidal undead on her tail, Kitty may have bitten off more than she can chew...

"Werewolves, (also known as lycanthropes) are mythological or folkloric humans with the ability to shape shift into wolves or anthropomorphic wolf-like creatures" have been the subject of stories probably since before the written word. Thanks to film and literature though, the werewolf is one of the most recognized

horror icons but not that long ago, authors began to make these creatures people that actually changed into beautiful wolves. Even more recently, these types of werewolves have become quite common in paranormal romance and urban fantasy and they can almost rival vampires (and quite often do) in popularity. Carrie Vaughn is one of these authors and her heroine is a werewolf, named ironically enough Kitty Norville. She’s a radio-DJ who first got her start in Kitty and the Midnight Hour.

Kelley Armstrong, Charlaine Harris, Laurell K. Hamilton, Patricia Briggs, and several others softened me up a little bit about werewolves because I prefer (and probably always will) vampires more. There’s just something so fresh and original about Vaughn’s Kitty series though! When asked what sparked the idea for it the author replied, “I decided Dr. Laura would never be able to handle a call from a character in one of these stories, so this

world needed its own call-in radio advice show. A werewolf named Kitty seemed the natural host for such a show. The story kind of exploded from there.”

Kitty and the Midnight Hour does such a good job of introducing the characters and the world that they live in. In a slight way, the book kind of reminds me of Brigg’s series but I can almost say that I like Kitty more. The idea of a werewolf talk show host is just interesting no matter how you look at it and I loved Carrie Vaughn takes female empowerment, self-discover, and prejudice to the next level without smacking you over the head with it. The author sets up a little story arc in this book so I’m curious as to what happens next!
--------------------------------------------------------------------- 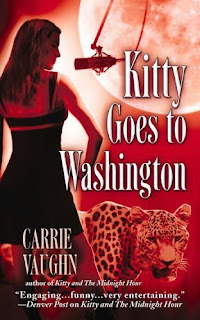 The country's only celebrity werewolf, late-night radio host Kitty Norville prefers to be heard, not seen. But when she's invited to testify at a Senate hearing on behalf of supernaturals, her face gets plastered on national TV. Kitty's been in hot water before, but jumping into the D.C. underworld brings a new set of problems.

And a new set of friends and enemies, including the vampire mistress of the city; an über-hot Brazilian were-jaguar; and a paranoid, Bible-thumping senator who wants to expose Kitty as a monster. Kitty quickly learns that in this city of dirty politicians and backstabbing pundits, everyone's itching for a fight.

The second book to Carrie Vaughn’s Kitty series is quite a bit different from the first one. "Kitty is a werewolf who starts a talk radio advice show about the supernatural ... In [Kitty Goes to

Washington], the stage gets bigger--she's the country's first werewolf celebrity and has to deal with that as well." Not to mention all of the new characters she meets during her stay in Washington and not all of them are friendly…

As I said in my review of the first one, werewolves were never really my thing even though the Anita Blake series by Laurell K. Hamilton was my introduction into urban fantasy/ paranormal. Then I discovered Kelley Armstrong’s werewolves in her Women of the

Otherworld series and I found that I really enjoyed them. Then Patricia Brigg’s Mercy (and Omega/ Alpha) series was my next stop into the world of the Weres, which finally led me to picking up Ms. Vaughn’s amazing Kitty series. 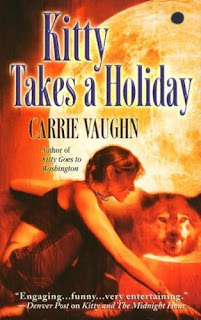 All work and no play makes Kitty a dull girl . . .

After getting caught turning wolf on national television, Kitty retreats to a mountain cabin to recover and write her memoirs. But this is Kitty, so trouble is never far behind, and instead of Walden Pond, she gets Evil Dead. First someone leaves grotesque animal sacrifices on her front porch to curse her, then werewolf hunter Cormac shows up with an injured Ben O'Farrell, Kitty's lawyer, slung over his shoulder. Two hotties and one Kitty in a single-room cabin -- can the situation get more tense? When a wolf-like creature with glowing red eyes starts sniffing around the cabin, Kitty wonders if any of them will get out of these woods alive...

Starting with a bunch of short stories, author Carrie Vaughn realized she really had something with her werewolf DJ-turned-supernatural-radio-talk-show-host Kitty Norville. Now after a couple of major battles and some humiliations (one really big one), her heroine has tucked her 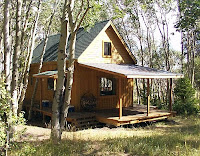 tail and slunk away to lick her wounds in the third book Kitty Takes a Holiday (also known as Kitty Goes on Holiday). Of course being Kitty, trouble seems to follow wherever she goes…

Kitty is perhaps my favorite werewolf for many reasons not the least of which is because when she is knocked down, she somehow copes and moves on. Which is why I was so upset when I learned that due to what happened to her in Kitty Goes to Washington she essentially runs away. I also really missed the radio show aspect of the book (the author does still include a playlist at the beginning of the book like all the others in this series) as Kitty is actually taking a “holiday” from her radio show and even though she was scared, I still missed it more than she did. She's so good at what she does and it seems a terrible shame for her to hide. 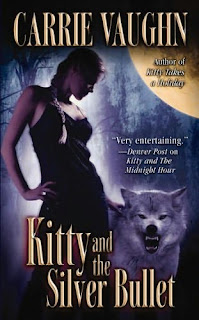 Kitty's radio show is as popular as ever and she has a boyfriend who actually seems to understand her. Can she finally settle down to a normal life? Not if this is just the calm before the storm. When her mother falls ill, Kitty rushes back to Denver--and right back to the abusive pack of werewolves she escaped a year ago. To make matters worse, a war is brewing between the city's two oldest vampires, threatening the whole supernatural community. Though she wants to stay neutral, Kitty is again drawn into a world of politics and violence. To protect her family, her lover, and herself, she'll have to choose sides. And maybe become what she hates--a killer.

Kitty and the Silver Bullet is the fourth story in Carrie Vaughn’s Kitty Norville series and in it, everything comes full circle… in short, Kitty is going home again. However, she isn’t the same

person or wolf that she was when she left. That’s not to say that she goes looking for trouble but as usual, it seems to find her one way or the other.

When talking in an interview about Kitty the author said, “The comment I get the most is how real she is to people. People tell me that they relate to her, that they can see her as a friend. I think because she isn't totally wrapped up in being a werewolf, that isn't

the be-all and end-all of her existence, she appeals to a much wider audience. It seems like most werewolf stories are all about the angst of being a werewolf, of trying to cure it, of losing control to it. That stereotypical Jekyll and Hyde dichotomy doesn't interest me at all. I made a conscious decision to say, "Okay, she's a werewolf, she's dealing with it, let's move onto to other things now…" and what “things” they are!

Just about every character that we’ve met over the course of the book makes some kind of an appearance in Kitty and the Silver Bullet and there are even some new ones thrown in too. There’s an enormous battle, but the main strengths of the story: the characters and the humour continue to shine through. This particular story arc has ended but there are quite a few more adventure for Kitty ahead and I can’t wait to find out what they are.

~Note: I’d like to thank Lady T from Living Read Girl for getting me a signed copy of Kitty and the Midnight Hour.

Picture Explanations
Radio Station: Kitty started off as a DJ but one late night question later, she has her own supernatural radio talk show.
Wolf Pack: Kitty was the "cub" of her pack until she got her radio station....
Senate: After her radio show becomes a big success, the government begins to take her claim of being a werewolf seriously and they subpoena her.
Traveling Preacher: A preacher claims he can cure supernaturals but those that join, very few ever want to leave and Kitty finds out why!
Cabin: Almost this whole book has Kitty in the woods in the middle of nowhere.
Wolf: Even though she's in the middle of nowhere she eventually has company!
African Wild Dog: A friend of Rick the vampire's named Dack who is a Were.
Spray Bottle: Filled with holy water to war against the vampires not on Rick's side.
Posted by Ladytink_534 at 12:30 AM