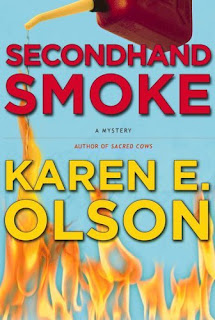 Awakened by a loud commotion, New Haven reporter Annie Seymour wanders outside to discover a favorite Italian eatery engulfed in fire. Even more shocking is the bullet-ridden body found in the debris. Then things get personal. Annie's father, a Vegas casino boss, suddenly arrives in town and the restaurant hires hunky private eye Vinny DeLucia, with whom she has some unfinished business. Now trying to cut through the smoke to uncover the real story, Annie questions her father's connection to the crime. Between the FBI, her would-be hero Vinny, and some raucous animal rights protestors, Annie must peer through the familiar town houses, worn-out sidewalks, and back alleys of her youth to determine a killer's motives-and avoid being burned next...

New Haven’s feistiest crime reporter Annie Seymour returns in Karen E. Olson’s Secondhand Smoke in which she’s attracting all kinds of trouble. This time she’s stepping on some very powerful toes as well as making an enemy of members of the community she grew up in. Not

to mention the fact that her father and the FBI too both breeze into town! Needless to say, Ms. Olson’s knack for crime writing hasn’t diminished with her second book.

Annie made such an impression on me in Sacred Cows that I simply had to pick up the sequel. She’s rude, can be crude, but she gets the job done and I honestly like her. I also really liked her potential love interest Vinny (who supposedly looks exactly like Frank Sinatra) who is a private detective. They really make a good team as "Vinny wants to resolve the problem, [and] Annie wants a story." While Annie is good at her job (she’s a newspaper reporter that specializes in crime cases), with each passing book it is more and more apparent that she just doesn’t enjoy it anymore. The author herself is a retired r 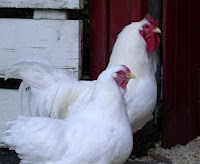 eporter so I can’t help but wonder if her character retires before the end of the series?

Secondhand Smoke wasn’t quite like the previous story and actually the plot itself felt like something you would find in a Janet Evanovich Plum novel- complete with mobsters. However, Annie herself remains an original which the author herself described perfectly in an interview: “She’s a tough-talking (yes, that means she uses four-letter words) crime reporter. She has a healthy appetite for food and sex and is someone I could definitely see hanging out with. She’s got strong ethics but doesn’t take herself too seriously. She can kick some serious ass.”

Picture Explanations
On Fire: One of the neighborhood restaurants goes up in flames at the beginning of the book
Chickens: Tic-tac-toe chickens is all I’m going to say…
Posted by Ladytink_534 at 10:28 PM