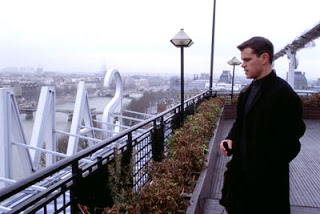 “A new action hero is Bourne!” (Access Hollywood) Get ready for the explosive, action-packed hit with incredible fight sequences, starring Academy Award winner* Matt Damon (Ocean’s Eleven). Pulled from the sea with two bullet holes in his back, Jason Bourne discovers he has the skills if a very dangerous man and no memory of his violent past. Racing to unlock the secret of his own identity, he discovers the deadly truth: he’s an elite government agent. But to the government, Jason Bourne isn’t just their property, he’s a malfunctioning thrity million dollar weapon. Leathally trained, built to disappear, he’s an agent on the run who has to be taken out. Now, the government’s top operative has become it’s number one target, in a super-charged, thrill-a-minute spectacular loaded with “Non-stop action!” (Bill Zwecker, FOX-TV)

"The main point with The Bourne Identity is that it’s an action movie that’s character-driven. The violence isn’t gratuitous, the action in the movie is actually driving the story, and in between the action sequences there’s tension that’s building — it’s just like one of those Hitchcock films that I love. I think it’s tough to find an action movie that can be a relief from the genre, but there’s definitely room for movies like The Bourne Identity to come out that are just really great, surprising and fun.” 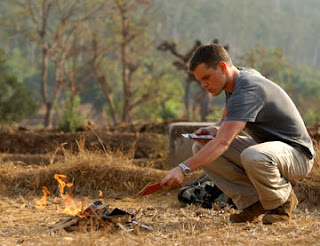 They should have left him alone. Academy Award winner* Matt Damon is back as expert assassin Jason Bourne in this stunning, non-stop action hit. Fuelled by awesome fight scenes and some of the most breathtaking chase sequences ever filmed, it’s a state-of-the-art espionage thriller that explodes into action and never lets up!

Thanks to the overall positive response to the first Bourne film, work began on its sequel The Bourne Supremacy very soon afterwards. However, the original director Doug Liman had to

bow out (he continued to produce the Bourne films though) and Paul Greengrass took over. Thankfully, he continued to make the film as Identity had been made: smart, savvy, and character-driven. The entire Bourne franchise is based on Robert Ludlum's popular Bourne trilogy but only to a degree, most of this film has a completely different plot due to trying to make it more modern.

Despite the director change, a few of characters from the previous f

ilm return- besides Jason Bourne of course! To me this film just felt more gritty for lack of better word. Matt Damon seems more at ease in the character and although he can no longer realistically be considered a “good guy” he’s too complex to fall into the category of “bad guy” either. Pamela Landy played by the wonderful actress Joan Allen, is another character that can't be placed in one category or the other. She's the Deputy Director of the CIA and she obviously wants to do what she thinks is right but what should be right and what is are two very different things.

action-packed. Nothing blows up unless it’s to move the story along, and in each “sequel” more is discovered about Jason Bourne. Robert Ludlum only created three books in his series about Bourne but to coincide with this movie release, Eric Van Lustbader took over the series (with permission from Ludlum’s estate) and continued them, publishing the first one The Bourne Legacy the same year as this film came out. I have yet to read any of the Bourne series but as much as I enjoy the films, I’m almost positive that the original source material will be just as good 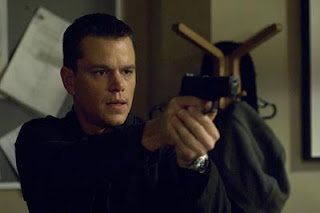 Matt Damon returns as highly trained assassin Jason Bourne, who is on the hunt for the agents who stole his memory and true identity. With a new generation of skilled CIA operatives tracking his every move, Bourne is in a non-stop race around the globe as he finally learns the truth behind his mysterious past. Loaded with incredible fight and chase sequences, it’s the exhilarating movie with “mind-blowing action” (Robert Ebert, Chicago Sun-Times that you can’t afford to miss!

Bourne Ultimatum. Every Bourne film has done incredibly well when released, but this was the first one to be recognized at the Academy Awards. It actually took home three Oscars for Best Sound, Best Film Editing & Best Sound Editing.

There have been many complaints about the director's "shaky camera" technique, which is a lot more noticeable in this film than in the last. That particular technique is undoubtedly annoying and even unnecessary but it does add a bit of realism to the chase scenes. The locations are gorgeous (it was filmed in London, Tangier, Paris, Madrid, Berlin, New York and a few

other locations as well) though and I love the film series so was very willing to put up with it.

Usually as a series goes on it tends to be not as good as when it started or it gets better. As much as I liked The Bourne Identity and The Bourne Supremacy, I enjoyed this Bourne a whole lot more even with its problems. The characters are a little older, the 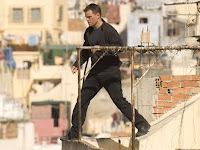 story is a bit grittier, but it’s just now getting even more interesting.

Although there were claims that there wouldn't be a fourth Bourne film by Matt Damon and the director Paul Greengrass, as of October work has already begun on it although it's still untitled. Whether it will be loosely based on the series of books that Eric Van Lustbader wrote after Robert Ludlum's death or not still hasn't been said. However, Damon, Julia Stiles, and Paul Greengrass have already signed on. This story arc ended very well so I can’t wait to see what Jason Bourne does next!