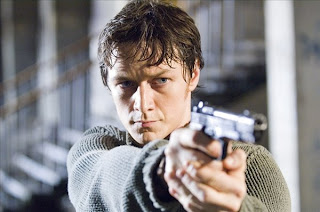 Wesley's (James McAvoy) life is over - his pathetic, old one, anyway... Fortunately, it is all because of a girl. Enter sizzling-hot Fox (Angelina Jolie), who crashes into his life and introduces him to the Fraternity, a secret society of assassins, led by the enigmatic Sloan (Morgan Freeman). Seems Wes's long-lost father was killed while working for the Fraternity and Wes has been selected to target the rogue member who murdered him. But before he can complete his assignment, Wes must first uncover the dark secrets behind the Fraternity in order to determine his own destiny.

Loosely based on a graphic novel series by Mark Millar, Wanted is a fantastic action thriller the

likes of which hasn‘t been seen since The Matrix. A very talented cast of actors star in the film such as James McAvoy, Angelina Jolie, and Morgan Freeman among many others but despite their popularity, Wanted will not be riding on their coattails- it will be enjoyed because it’s just that good.

Not exactly a typical action film or comic book based film plot-wise (it’s certainly no Spiderman!) but although there have been some bad reviews; the response has been good for the most part. In an interview, the actor McAvoy

called the director an “evil genius” and I couldn’t have phrased it better myself. I loved how it doesn’t really look like a comic book film (it’s nothing like 300- it‘s more “reality-based“) and it really has the look and feel of an action thriller too.

There isn’t one person can be considered the “good guy” in Wanted because almost all of them are kind of anti-hero and it makes the story that much more interesting. I especially enjoyed Jolie and McAvoy’s performances and I hope that the latter will star in many more films to come (hopefully ones where he can put his adorable Scottish accent to use- unlike this one where he

has an American accent). Angelina Jolie recently has been only in “serious films”, her last action role was 2005’s Mr. and Mrs. Smith so it was nice seeing her back in what I consider her element too.

I can’t say how much the movie is like the graphic novels it’s based on because until recently, I had never heard of them and I’ve never seen any of the films Timur Bekmambetov has directed either. What I do know is that the cast is great, the action is on-the-edge-of-your-seat good, and even the music is amazing (my favorite composer Danny Elfman was in charge of that). The film has recently come out of DVD and I’m looking forward to seeing it again.