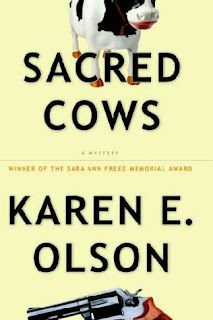 Yale's stone Gothic buildings tower over the city of New Haven as if they are a part of it. But even though the sidewalks spill into each world simultaneously, there is an invisible line that keeps Yale on one side and the city on the other. When the worlds collide, it could mean murder.

New Haven Herald police reporter Annie Seymour is tough, smart and has a self-deprecating sense of humor. She knows she's too cynical and a workaholic, but she's comfortable with that. She lives in a brownstone in the city's Wooster Square neighborhood, just around the corner from great white clam pizza.

When covering stories for the paper, Annie doesn't let herself get too close to the victims she encounters, so she can keep her objectivity. But when Yale student Melissa Peabody is found dead, Annie's investigation into the girl's secret life brings her closer to home than she expects.

Dick Whitfield, a young reporter, is constantly underfoot, and Annie's boyfriend, Detective Tom Behr, frustrates her with his reluctance to help her get her story. But private investigator Vinny DeLucia is also on the case. They join forces, and Annie realizes it could be the most dangerous story she's ever had to write.

Ripping story ideas from newspaper headlines is a common practice among authors and the writer Karen E. Olson is no exception. "In Sacred Cows, the dead girl in the first chapter is a Yale student who was an escort by night. In the "real" story, the dead girl was a prostitute. 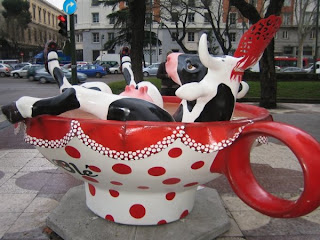 I kept thinking: But what if it were a Yalie? It wouldn't get ignored like this story did," so using this idea, Olson began writing her first book. A retired journalist herself, the author had first hand insight into her heroine Annie Seymour who is a cop reporter in New Haven, Connecticut.

The premise of a college student turned escort in her spare time for money is not really a new concept and I'm not positive if it's based in truth or not but I do know that I have seen something similar in either a Law and Order or a CSI episode. It took me a little while to get into the book even though many bloggers

have raved about it but I’m glad I stuck with Sacred Cows (I have to agree with Annie that those painted cows are a little creepy too).

The “mystery” aspect wasn’t really that important to me (or very hard to figure out), I was more concerned about how Annie would handle herself in the situations she kept getting into. Annie Seymour is a self-described curmudgeon but once I was able to warm up to her, I really liked her personality after awhile- she’s a no nonsense type of woman that speaks her mind. For me at least, the success of this debut novel owes the main character because while she may be about my mom’s age she is still eas 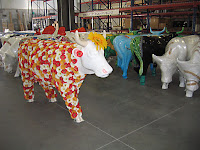 y to relate to (there were times I wished she was a tad bit younger though). I do have to give credit to Ms. Olson for the way the book is written though, it reads almost like a cozy mystery but has the language and (sometimes) feel of a regular crime drama.

Winner of the Sara Ann Freed Memorial Award and runner-up of the Gumshoe Award for Best First novel, Karen E. Olson's reporter has garnered quite a bit of attention and is the star of three more novels. I think Wendy from Musings of a Bookish Kitty said it best: "Annie has moxie. She is cynical, rough around the edges, and tenacious in the pursuit of her story. Do not let that fool you, however, because Annie does have heart. Karen E. Olson has created an edgy and intelligent character that quickly earned my respect and had me pulling for her through the entire story."

Interview: With Alice Teh

Picture Explanations
Cow in a Tea Cup: After the success of New York's Cow Parade, New Haven has one too.
Frank Sinatra: One of the guys Annie works with and has a thing for in the book looks like Sinatra.
Cow Doctor: Annie has to interview the person who fixes the cows when they need it
Posted by Ladytink_534 at 11:42 AM