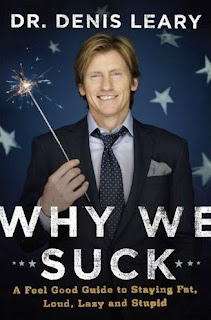 Then buy this book, because inside Dr. Denis Leary is ready to help you overcome all the sucky things that make you such a suck[sic]. Not to mention all the fat, loud, lazy and stupid suckholes you have to deal with at the office, family gatherings or while using public transportation.

Part memoir, part self-help tome but definitely a full-time funny assault on all the posers, politicians and pop culture icons who have sucked in public for far too long, this book is a call to arms for everyone who feels the way the good doctor does:

* Skinny jeans are for skinny people.
* Men will never change. Not even into clean underwear.
* If God didn't want us to eat meat, why did He make the cow so slow (Ever eaten a cheetah-burger? Nope. And you never will.)

But this book and you will hopefully laugh out loud, call your mom a little more often and never vote for a member of the Bush family ever again.

At the very least, though, you'll have yourself a nice big twenty-six-dollar coaster to place your drink on while you watch TV. And isn't that reason alone to buy it?

Denis Leary and his book Why We Suck: A Feel Good Guide to Staying Fat, Lazy, and Stupid is going to and has made a lot of people mad… it’s what he’s good at. Some of what he says is 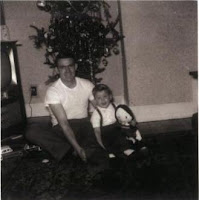 completely true, some, he says just to get a rise out of people. “This is a comedy book. Which means it’s meant to be funny,” the now Dr. Leary says in his second note near the beginning of the book. It’s his opinions and his voice can be heard loud and clear, he warns his audience that he’s “not here to make you feel all warm and fuzzy or superior to everyone else,” in other words: he’s not going to play nice- as usual!

I was very tempted to do as the author suggested in the prologue and put the book down quite a few times. He’s right, he did shock me and even disgust me at points but I doubt he would consider he 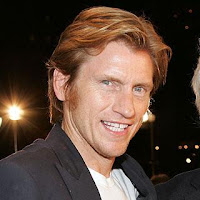 had done his job if he hadn’t! I did keep reading even though it wasn’t quite as funny as I thought it would be (at least not to me). However, I did find a lot of it amusing. Will I continue to see his movies and stuff? Yes, but I might be a little more wary the next time he writes a book.

When Why We Suck first came out there was a big scandal covered by Fox News and even autism advocates because of the sixth chapter of the book in which Leary attacks parents who have gotten their children labeled as autistic. This is what has made so very many people angry (and therefore boosted the sales of the book): "There is a huge boom in autism right now because 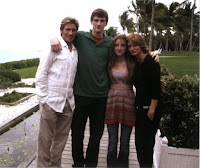 inattentive mothers and competitive dads want an explanation for why their dumb[sic] kids can't compete academically so they throw money into the happy laps of shrinks and psychotherapists to get back diagnoses that help explain away the deficiencies of their junior morons. I don't give a [sic] what these crackerjack whackjobs tell you---yer kid is NOT autistic. He's just stupid. Or lazy. Or both." The odd thing is, is that Leary then goes on to say that he has met actual autistic kids and they are “extremely bright and attentive” so by taking this out of context, people hear what they want to hear. What is really sad is that he is sort of right, there are parents who do abuse the system and take away from kids who really do have special

Out of all the comedians on this planet if I were asked which my favorite was, the first person to come to mind is Denis Leary (then Robin Williams, but I digress). He’s genuinely funny because he’s brutally honest and although that sometimes can be misconstrued as cruel, he’s also a pretty good guy most of the time (he gives to charities a lot, set up a few himself, and has even did some voice work for a few animated films). However, as much as I like him and enjoy his performances in film and otherwise, there were quite a few parts of his book that I didn’t like at all (and unsurprisingly found quite a few things very offensive) but there were more than a few topics on which I agreed with him. Will his book change America and stop its citizens from being stupid, fat, and lazy? I sincerely doubt it, but his little “self-help” book will make people laugh (sometimes).

Visit msnbc.com for Breaking News, World News, and News about the Economy

New comments are not allowed.