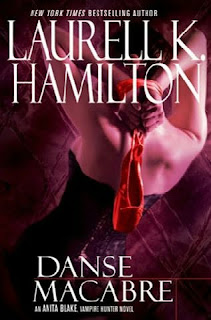 Anita Blake needs to be concentrating on a dangerous situation: The ardeur, the sexual power that flows between Anita and Jean-Claude, the Master Vampire of the City, and Richard, the volatile werewolf who loves her passionately, is reaching new levels, perhaps evolving into something altogether new. The ardeur seems to be choosing new lovers for Anita, acting with a will of its own. As Jean-Claude says, the ardeur is hunting powerful prey. The unexpected effect of this is that Jean-Claude’s own power as a master vampire has grown to new levels-- and Richard, never predictable, is changing, too.

But as the days pass. Anita’s less interested in vampire politics than in an ancient, ordinary dread she shares with women down the ages: She may be pregnant. And, if she is, whether the father is a vampire, a werewolf, or someone else entirely, she knows perfectly well that being a Federal Marshal known for raising the dead and executing vampires is no way to bring up a baby…

A pregnancy scare was bound to happen eventually in Laurell K. Hamilton’s Anita Blake series ever since Anita inherited the ardeur from Jean-Claude and she has to have sex to “feed” it. Like a vampire needs blood, Anita needs sex to keep herself from draining the life out of her new triumvirate with Nathaniel 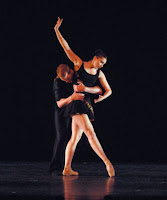 (wereleopard) and Damian (vampire) but unlike regular hungers, the ardeur just may have gotten Anita pregnant in the fourteenth book of this series Danse Macabre.

There’s also a lot of Master Vampires of the Cities around the United States (Hamilton’s version of it any way) in town to enjoy the all vampire ballet that Jean-Claude is sponsoring and they bring a lot of problems with them as well. A major one is Anita needs to a new pomme de sang (someone to feed the ardeur on that‘s not tied to her metaphysically) and these vampires are bringing ones for her choose from which makes her feel very squicky. Only two vampires are really introduced: Augustine (Auggie) of Chicago (who is also a mobster) and Samuel of Cape Cod. Samuel brings his sons that are part mermaid/ siren and part vampire (very rare) and Auggie brings his werelions as candidates which is especially fortunate because one of the new beasts in Anita (she has four: wolf, leopard, lion, and unknown at this point), the lioness is getting out of hand and trying to come out even though Anita isn‘t really a shapeshifter. The newest man that is drawn to her through metaphysical stuff she calls Cookie Monster (from his blue hair and tattoo) but his real name is Haven. He’s a professional thug for Auggie but I still think he’s neat, even if he is bad news for the way Anita’s life works right now.

There is no police investigation in this book but Marmee Noir, the Mother of All Darkness appears in Danse Macabre too. There’s always something bad from book to book but she’s the buildup, the extremely scary bad guy. She’s still asleep (kind of a coma sortof) but she’s waking up and it’s partly because of Anita because she interests her and that’s like having the devil himself take a particular interest in you. Oh and Richard is a big part of this book too though I still can’t stand him and it’s getting to the point where I think Anita will be agreeing with me soon. Overall, Anita collects some more men and discovers new powers in Danse Macabre. She also helps give a lot of her original men more powers, learns how she and the men in her life would react to a baby, and just how far she can push the ardeur before it pushes back.

I thought about it, then nodded. "Yes, it is, because it has to be. My life wouldn't work if I wallowed in every disaster, every moral quandary. I can't afford the luxury of self-doubt, not to that degree."
"Luxury," Richard said. "This isn't luxury, Anita, it's morality. It's your conscience. That's not a luxury item, that's what separates us from the animals."
Here we go again, I thought. Out loud I said, "I have a conscience, Richard, and my own set of morals. Do I ever worry that I'm a bad guy? Yeah, sometimes I do. Do I wonder if I've traded away pieces of my soul, just to survive? Yeah." I shrugged. "It's the price of doing business in the real world, Richard."
"This isn't the real world, Anita. This isn't the normal workaday world."
"No, but it's our world."

Part of me hopes that someday I get over being so damned uncomfortable about group scenes like this; part of me hopes I don't. It's sort of the same part of me that mourns that I can kill without feeling bad about it, most of the time. Yeah, that same part thinks that doing metaphysical sex in front of a bunch of men, for any reason, is just another step down the slippery slope to damnation. But if the alternative is having the ardeur go off like a metaphysical bomb during the party tonight, well, what we were about to do was the lesser evil. Still it might be nice, once in a while, not to have to choose between evils. Just once, couldn't I choose the lesser good?

I shook my head, and the world swam in streamers of color. I had a moment of nausea, and that was the moment that I realized I was sick. Sick at heart, sick of soul, sick of it all. Somewhere deep inside me, I was trying to undo all my decisions. I was trying to do a take-back, on a game that had played too far for a do-over. The front part of my brain knew it was too late, but it wasn’t the front part of my brain that was in charge. How do you argue with the subconscious? How do you argue with a part of your brain you don’t even know is there most of the time? The real bitch of the situation was, I wasn’t sure I wanted to argue.

First Paragraph: It was the middle of November. I was supposed to be out jogging, but instead I was sitting at my breakfast table talking about men, sex, werewolves, vampires, and that thing that most unmarried but sexually active women fear most of all-- a missed period.

Picture Explanations
Ballet: The reason for a lot of the vampires being in this book
Lioness: The strain of lycanthropy Anita caught from Chimera is starting to manifest itself.
Posted by Ladytink_534 at 7:01 PM